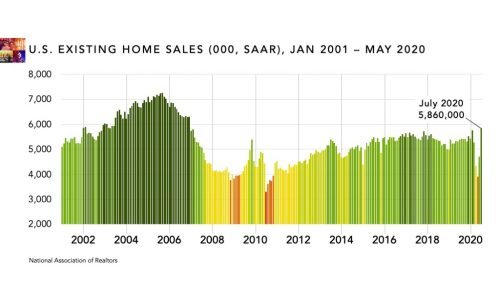 When July housing starts came in. the U.S. was up 22.6% for the month. Builders were ecstatic. Most economists said Don’t be; it won’t last.

Yesterday July existing home sales were released: 5,860,000 (annualized) was a 24.6% increase from June, an 8.7% increase YoY—and the highest level since Dec. 2006. MarketWatch cited Daren Blomquist, Auction.com’s VP market economics, who warned that “the housing market is on a sugar high” that “will not last.”

Blomquist may be right, if only because the U.S. is running out of inventory to sell. The supply of for-sale existing homes fell from 3.9 months’ worth in June to 3.0 in July. Six months’ supply is normal.

Meanwhile in Canada, July existing home sales rose 26% from June and are up 30.5% YoY according to the Canadian Real Estate Association. 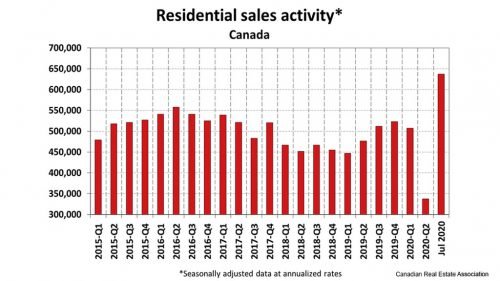 CREA reports that the market “continued to rebound in July 2020, with new listings hitting their highest level on record for the month of July, while sales posted the highest level of any month in history.” (my italics)

Economists have a well-deserved reputation for not being willing to take yes for an answer; it’s possible that housing will skate through the rest of the year unscathed. It’s probably not a good idea to bet money on it, though.

The best you can say right now is that nobody has a clue what will happen.