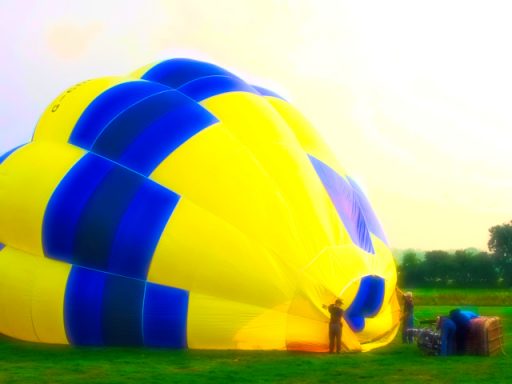 Americans don’t agree on much these days, but we still stand together when faced with an existential threat. The trick is getting consensus on the threat.

We don’t have it on climate change or who gets to use which bathroom, but on one topic there is solidarity across the political spectrum.

In a recent Fox News poll, 83% of Americans said they’re worried about inflation: four out of five of Democrats and nearly nine out of ten Republicans. A mid-June survey from Harris Poll and Harvard’s Center for American Political Studies found that 85% were concerned about inflation. In the New York Federal Reserve’s latest consumer survey, the consensus was that we’re in for 4.8% inflation in 2021, then 3.6% for the next three years.

All of which has absolutely nothing to do with what will actually happen. That’s why we get economic projections from economists. They’re often wrong, too, but at least they have reasons for their opinions. The American public typically knows nothing more than what it sees in the headlines.

And apparently quite a few of us spotted this July 11th headline in the Wall Street Journal: “Higher Inflation Is Here to Stay For Years, Economists Forecast.” 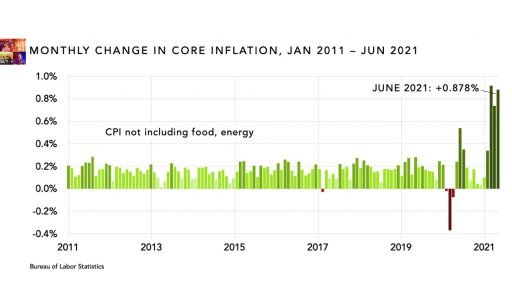 Until you get to the third paragraph. Turns out that the economists WSJ polls each month expect core inflation (not counting food and energy, which are volatile) to hit 3.2% YoY in Q4 2021, then “recede to slightly less than 2.3% a year in 2022 and 2023.”

2.3%? For over 25 years, the Federal Reserve has defined 2% as the optimal rate of inflation for a healthy economy. 2.3% should be well within the Goldilocks zone—not to mention the fact that “here to stay for years” generally means more than two.

Obviously WSJ’s economists could be wrong. But if you’re worried, you just need to read more headlines. In WSJ, for example.

On July 7th, the word was “Don’t Worry Too Much About the Inflation Surge.” Alan Blinder, a former vice-chair of the Federal Reserve, argues that the factors behind the recent spike are temporary: bounceback from three months of deflation when COVID first hit, supply chain bottlenecks as the economy comes back online, and “the extreme fiscal stimulus that has been driving spending.”

Runaway inflation occurs when we’re running full bore and supply still can’t catch up to demand. Blinder thinks there is plenty of slack in the economy. Labor force participation fell sharply when COVID hit and the factors causing that decline “will dissipate over time, giving the labor force room to grow,” he says.

That’s good news if Blinder turns out to be right. But in housing it appears that the horse is already out of the barn.

LBM dealers would be ecstatic if all they had to deal with was a piddly 4.8% YoY spike. At LinkedIn last week, Todd Tomalak of John Burns Real Estate Consulting posted an illustration showing YoY changes in material costs since Q2 2020.

Across every major category the minimum increase was 8%, says JBREC. Lumber was the outlier, of course, up a whopping 115%. 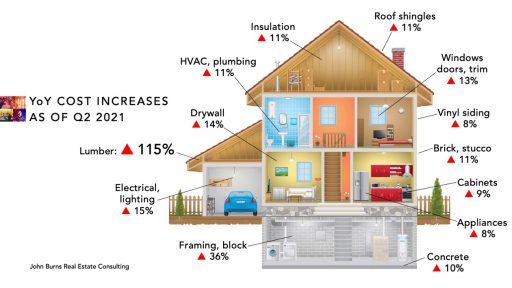 No mysteries here. A decade of sluggish demand discouraged forest producers from adding capacity. As the market started to get hot, the pandemic hit and everyone thought housing would collapse. Sawmills got caught flatfooted when it didn’t.

Throw in the fact that every distribution channel on the planet is a mess right now and it’s going to be a rough ride for a few months at least, maybe longer if inflation turns out to be stickier or more severe than most economists think it will be.

Procurement challenges are getting all the attention and there’s no question that they’re a pain in the neck. If there’s a bright spot, it’s that the people responsible for managing them are nearly always your most experienced pros.

But if inflation is here to stay for a while, the more difficult challenge will be to keep customers on board. As long as materials are in short supply, they don’t have a lot of choices. Most dealers have all they can do to keep their existing builders supplied and can’t afford to take on new accounts.

While that’s the right thing to do, it’s also dangerous. When customers don’t have the option to jump ship, the ship they’re on gets the blame for everything. As that crisis recedes, the lesson builders will take from it is either (a) you’re a loyal partner who did everything in your power to help, or (b) they need more choices.

So how do you make them choose option A? A recent Harvard Business Review article titled “How B2B Firms Can Price With Confidence As Inflation Rises” offers a number of suggestions on how to get through an inflationary period with your profits intact.

The caveat is that they came from a group of partners at Bain & Co. Some of them read like boxing lessons from someone who’s never been punched in the nose. For example, Bain suggests adding “surcharges for fuel, expedited shipping, inventory holding, and longer payment terms.” You could get away with that right now, but those charges won’t be forgotten when the supply chain is back on its feet.

Likewise, Bain notes that “many companies put price increase contingencies in their contracts but don’t regularly enforce them,” and suggests that you do so. If you have a contract with someone, suddenly making a stand on fine print you always ignored in the past is not the way to win friends and influence people.

Some of Bain’s ideas do have potential—for example, finding ways to mitigate the pain of price increases with enhanced services ranging from “volume guarantees to bundled products or adjusted service levels.” 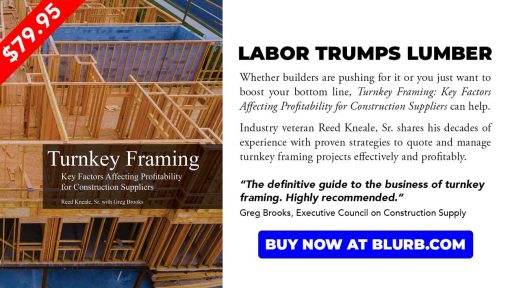 If you know you’ll have enough inventory to meet customers’ needs, make a big deal about it so they feel like you’re doing it just for them. If you can guarantee volume in a product category they need, offer a guarantee bundled with a category you don’t currently sell them.

If you have additional services you can offer free, do it even if you’ve offered them before. It doesn’t matter whether they take you up on it or not. As Al Trellis says, the power is in the offer.

But the best idea of the bunch is one that should be commonplace in construction supply and isn’t. “Instead of blanket pricing moves,” argues Bain, “use surgical increases informed by the cost to serve, historical performance, and value to the supplier of an individual customer or segment.”

Everyone has customers who are organized and efficient, and profitable to serve even at low gross margins. Everyone also has a few who are a mess, and marginally profitable (if that) no matter what you charge them.

The traditional way to separate the wheat from the chaff is with an ABC account analysis; the problem is that ABC is subjective. Few dealers know how to analyze their service costs with the degree of precision required to make a surgical pricing strategy effective.

Jim Enter does. Enter, a long-time industry veteran and consultant, developed a method to accurately calculate the cost to serve any customer based on deliveries, DSO, and other quantifiable factors.

It takes some effort to get set up, but once you do, the system is easy to maintain. The data underlying Enter’s spreadsheet formulas is readily available from the dispatch and delivery module of any ERP system—either the bolt-on Epicor offers for BisTrack or a third-party product such as Elite Extra.

That information not only enables you to price projects more accurately, it also gives you the facts you need to pitch customers on how they can get better pricing by helping you lower your costs.

The fact is that no one—economists included—knows for sure whether inflation will disappear in a year or two or become a long-term problem. There are a lot of things you can do to minimize risk as you navigate through this period, but the more data you have at your disposal, the more options you have available.