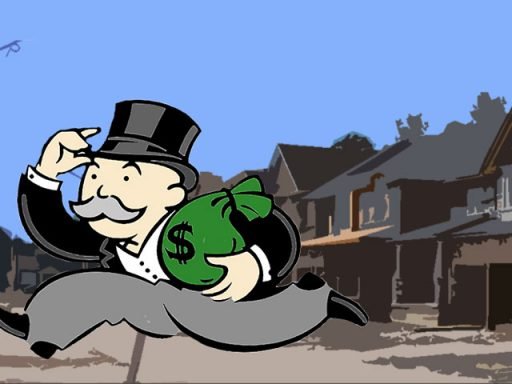 So far this year has been nothing but wall-to-wall angst: runaway inflation, stock market staggering, recession around the corner, gridlocked supply chain, COVID creeping back, Dust Bowl-grade drought everywhere west of the Missouri River, even a new threat of nuclear holocaust (because why not?).

Now the housing market is petering out. Both new and existing home sales have been slipping since the middle of last year, but new home sales hit a wall in April: down 16.6% from March and 26.9% YoY.

“Buyers just stopped buying,” a real estate agent in Boise told Axios. Boise was the hottest market in the country at this time last year. “Some listings now sit for weeks without even a showing.”

This is exactly what the Fed intended when it started raising rates. Now that it’s finally happening, it’s like jumping off the roof of a six-story building: The falling part is no problem, but everyone is a little worried about the landing.

We haven’t landed yet, so it’s still anyone’s guess how much it will hurt. But no matter what happens, we’ll always have 2021.

Years from now when you’re planted like a geranium on the front porch of the LBM Senior Living Center (in Naples, of course), you’ll be able to bore everyone who forgot to turn their hearing aid off with tales about the year you made more money than you ever made in your life.

At least we think so. All but a handful of the companies that make up housing and its supply chain are privately held, so financial data is scarce. But what little data is available suggests that anyone who sells wood feels pretty good right now.

Considering the lumber market, no one will be surprised to hear that 2021 was a banner year for publicly held forest producers. Net margins at both PotlatchDeltic and LP topped 30%. Weyerhaeuser was an “underperformer” with a piddly 25.6% net. Door and window manufacturers play in a different league, but Jeld-Wen more than doubled its net profit vs. 2019, and Masonite wasn’t far behind. 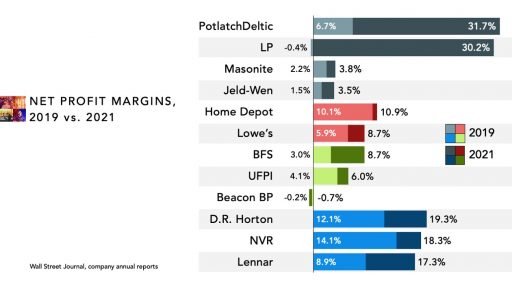 At the other end of the channel, some dealers have been feeling sorry for builders. Supply chain volatility is killing cycle time—build times are up a whopping nine weeks according to John Burns Real Estate Consulting. You would think profits would be down as a result.

In the distribution channel, profit gains depended on how much of your revenue came from commodity framing lumber. At Beacon Building Products, the answer was zero. That’s what Beacon earned last year, too: -0.7%, slightly below its -0.2% net margin in 2019.

Likewise, Home Depot and Lowe’s had a good year but not a “flash mob in Aisle 18” year. Both sell framing lumber, but neither one receives the majority of its revenue from residential new construction.

Builders FirstSource does, and it won the lottery in 2021. If your primary business is to provide shell construction materials to home builders, the rough rule of thumb is that 3% to 5% net margins are average, 6% to 8% is solid, and anything over 10% is grounds for a happy dance. 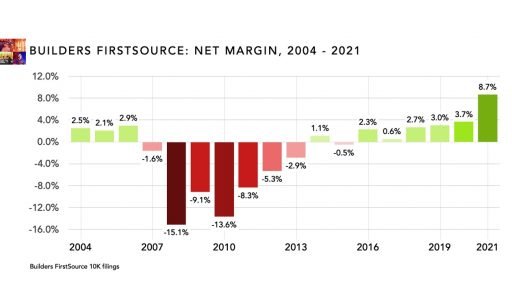 BFS posted an 8.7% net margin in 2o21. That’s a respectable number in anyone’s book—and an all-time personal best. It’s true that last year was an unusual year. You can argue that normal performance metrics don’t apply. But everyone was in the same boat. If independents have a right to feel good, BFS should, too.

Beyond public companies, it’s all guesswork. Or scuttlebutt: Rumor has it that 84 Lumber earned a double-digit net margin in 2021.

That may not be a surprise if you’ve been watching 84. For years the company has been working to bury its lowball reputation and transform itself into a value-added construction supplier. If the rumor is true, Maggie & Co. are making progress.

But we don’t know that for a fact. If we stick to facts, we’re limited to insights that can be waterboarded out of top-line data. And even that can be sketchy.

LBM Journal, HBS Dealer, and Webb Analytics all publish annual rankings of the largest construction suppliers. Those lists come out around this time of year, but so far only Webb Analytics’ Construction Supply 150 has been released (download the free report here).

The caveat is that if you expect any of the lists to be comprehensive and accurate, you’ll be disappointed. It’s not the publishers’ fault; it’s the nature of the channel.

When nearly everyone is privately held, you either get voluntary participation or you make estimates. If you estimate, your data will be inaccurate. If you rely strictly on voluntary responses, your list will be missing a lot of people.

Plus, the question of who should be on the list is more difficult than it might seem. At one time, the rankings were limited to lumberyards (LBMs) and home centers. Now they include component manufacturers (CMs), specialty distributors, direct-ship brokers, and even a handful of hardware stores.

The logic is that they all sell building products to contractors and that’s fine. Two problems: First, only a handful of companies in each of the more recent segments are represented. They tend to be the largest and most visible players, which gives an incomplete picture of that segment.

Second, the business models in each segment are different. Any comparisons of performance metrics that include those companies will be skewed.

That’s not to say there is anything wrong with that approach. It’s all judgment calls, depending on the picture you want to paint. But if you want historical context, you need apples-to-apples data. That means playing by the same rules your ancestors played by back in the Dark Ages.

So let’s try that with the CS150 (thanks to Craig Webb at Webb Analytics!). 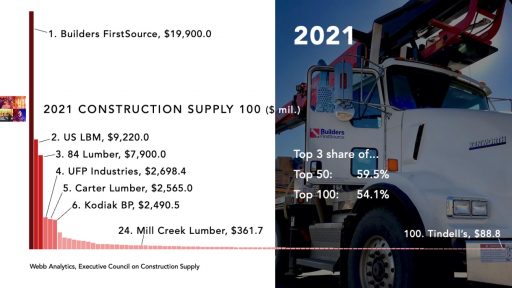 We limited our list to LBMs, CMs, and millwork one-steppers whose primary business is to provide framing materials and/or finish wood products to building contractors, and who receive at least 51% of their revenue from contractors.

On LinkedIn the other day, Craig made a point about the size of the largest chains relative to the rest of the industry. “Builders FirstSource, US LBM, and 84 Lumber together account for 64% of the top 50 lumberyards’ revenues on this year’s CS150 list. Add the next 50 yards and the Big Three’s share shrinks only to 60%.”

Now let’s wind the clock back to 2011. At first glance, the chart doesn’t look much different. We’ve still got one megaplayer at the top (ProBuild Holdings), and No. 1 is roughly double the size of No. 2. 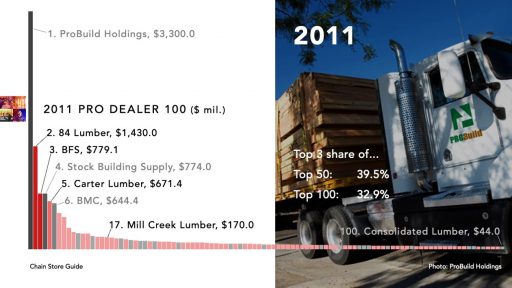 But the more important difference is who contributed to that growth. The grey bars in the chart indicate dealers that are no longer in business today: 23 of the top 100, including three of the top six.

Step back another ten years and Carolina Holdings—rebranded as Stock Building Supply in 2003—held the No. 1 slot in 2001. 84 Lumber was close behind and four others were within striking distance. The share of top 100 revenue held by the top three was 29%, slightly more than half of its 2021 level. 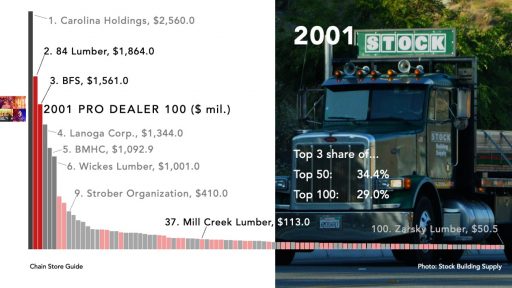 The picture gets fuzzier in 1991. Back then, most dealers thought of themselves as home centers. The term “construction supplier” didn’t come into common use until ProSales began promoting it in the latter half of the 1990s.

If you exclude warehouse retailers and others who were clearly chasing DIYers, 84 Lumber was in the No. 1 position, followed by Wickes Lumber. The share of top 100 revenue held by the top three chains was just 21%.

68 of the 1991 top 100 are gone today. Among the top 20, the attrition rate was 80%. The four that survived? 84 Lumber, Carter Lumber, McCoy’s, and Foxworth-Galbraith. What they have in common is they’re all family-owned. 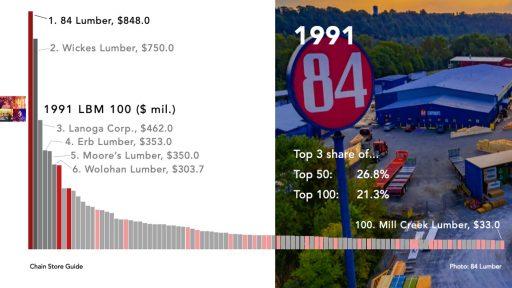 There’s no question that publicly held and private equity-backed companies have grown faster than the rest of the top 100. In 1991, 84 Lumber was 26 times the size of No. 100. Last year, BFS was 224 times larger than Tindell’s.

But while that’s notable, it might be a stretch to call it an accomplishment. That growth cmike mame because investors gave them money to go on a shopping spree. They didn’t capture a 60% share of the top 100’s revenue. They bought it—and given the attrition rate in the top 20, the odds are three to one that they’re just renting it.

On the other hand, it all depends on how you define accomplishment. If growth is your yardstick, BFS and US LBM are obvious winners. If you value survival skills, the trophies still belong with 84, Carter, McCoy’s, and Fox-Gal.

And if creativity deserves a vote, you need to look below the top 20. Tulsa-based Mill Creek Lumber & Supply made the top 100 list in 1991 by the skin of its teeth. Over the next ten years, the company grew 442%.

Independents can’t match the financial resources of investor-backed dealers. The caveat is that anything an equity-backed company spends money on needs to bear fruit quickly. They can’t stray too far from their core business as a result. If they do, they have to explain it to investors, and investors don’t like complexity.

Independents can go anywhere they want. Creative dealers look for niches that fit their expertise but won’t attract equity-backed megaplayers because they’re either too far out of the box or not scalable.

Like everyone, Mill Creek’s core business is providing framing and millwork to home builders. It goes head-to-head with BFS in all three of its markets. But Mill Creek also has a commercial casework division that builds custom projects across the Mid-South.

It also has a chain of 16 retail flooring showrooms. Mill Creek Carpet & Tile does go head-to-head with warehouse retailers, but flooring is not a price-sensitive category for the big boxes. Plus, service matters.

Henry Poor Lumber in Lafayette, Ind. has a retail flooring showroom, too. But Lafayette is within range of two major industrial corridors on the south side of Chicago. Those manufacturers consume a lot of pallets and crates, and many of them need to be custom-built. If so, Henry Poor builds them.

In California, Napa Valley is a major agricultural center not just for wine grapes, but all kinds of fruits and nuts. Central Valley found that irrigation supply was a perfect fit for a construction supplier. The products are different; the services are nearly identical.

Every year for decades now, trade publishers have honored the largest companies in the channel. That’s fine, and it’s a useful service for everyone. But it’s a lot more interesting to celebrate entrepreneurship.