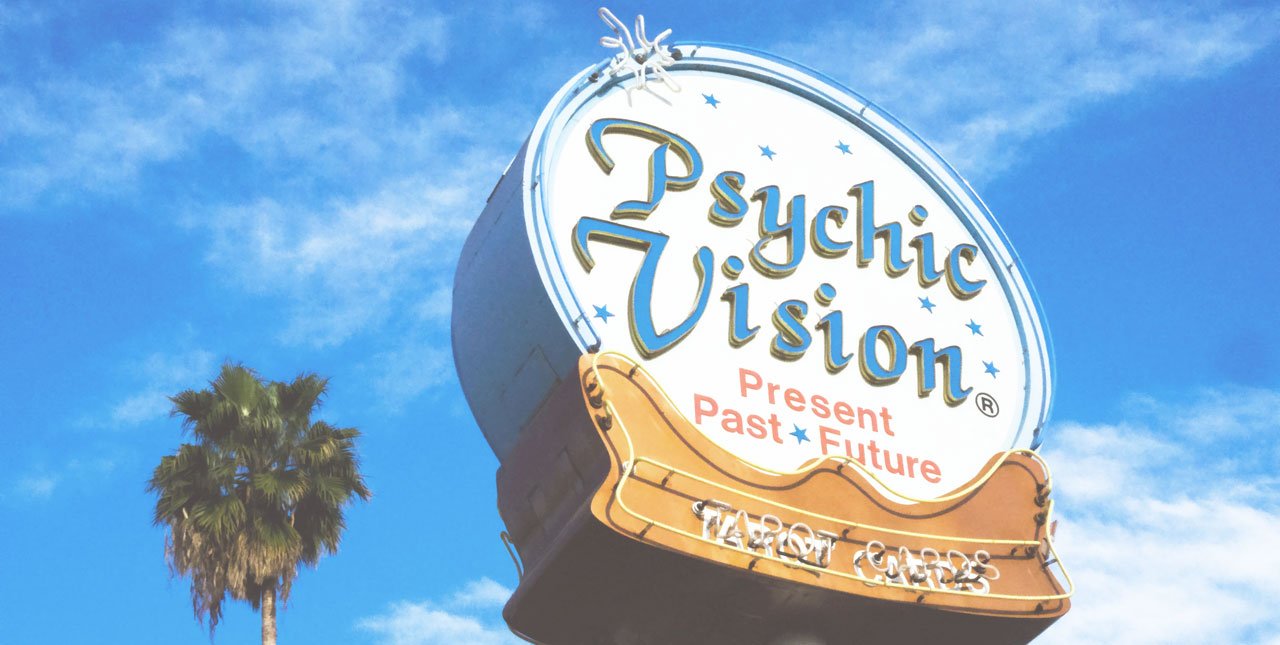 Yogi was right: It is tough to make predictions, especially about the future. Not that that stops anyone, of course. Especially now—a year ending in zero—it’s prime time for bold prognostication about the emerging trends driving housing and its supply chain during the next decade.

As always, some of it is lighter than air. For example, designers tell Builder’s Joe Bousquin that farmhouse and Craftsman home designs will continue to be popular in the 2020s (just like the 1920s) and black kitchens will be a thing (apparently for Goth soccer moms).

Some of it is relevant but scary. Mark Hulburt of Marketwatch thinks real estate will be “the single best investment for the next decade.” He knows that over the past 130 years, the average annual return on real estate has outpaced inflation by just 0.4% while T-bonds earned 2.7% and stocks earned 6.3%.

His argument is that “the stock and bond markets are currently so overvalued that it’s not only possible, but downright plausible, that real estate will do better.” In other words, securities will faceplant so hard, they’ll make real estate look good by comparison.

Some predictions are relevant and reasonable, but also a blinding flash of the obvious. Says NAHB chief economist Robert Dietz, “The home building industry will evolve in the 2020, and it will do so to enable additional volume growth.”

Of course it will. We’d be hard pressed to do worse than we did during the 2010s. We haven’t topped 1.3 million housing starts since 2008. The National Association of Realtors says we’re underbuilt by some 4,000,000 housing units. Prominent home building consultant George Casey of Stockbridge Associates says the number is more like 6,000,000. 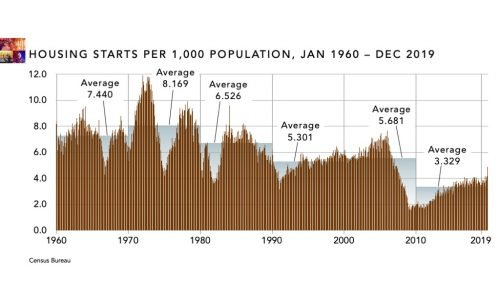 The bad news is that the underlying constraints on new home construction—chiefly lots, labor, and regulation—will not go away quickly. As a result, says Casey, “the excess of housing demand over housing supply will probably continue for a good part of the decade.”

Which will make for interesting times in the channel. Strong, sustained demand for housing probably means cycle time will continue to be a top priority for builders. If so, offsite construction will likely continue to gain ground.

Nearly everyone has bought into the notion that prefabrication is the cure for low jobsite productivity. Increasingly, prefab is a supplier’s ticket to ride in the single-family production and MFLC markets. Strong, sustained demand also makes now a relatively safe time for a major capital investment in manufacturing capabilities.

But before you run to the bank, there is one twist to consider.

For nearly 20 years, the sweet spot in housing has been spacious homes for Baby Boomers in their peak earning years. The 2000s in particular were McMansion heaven: Rapidly rising home values, low mortgage rates, and loose underwriting all encouraged people to buy more house than they needed (or could afford).

Upscale homes continued to dominate during the 2010s because of the constraints mentioned above. Building high-end homes was the only way builders could make the numbers work.

All that is coming home to roost in the 2020s. Right now Baby Boomers range from their mid-50s to their early 70s; they’re aging out of McMansions and downsizing. GenXers (late 30s to mid-50s) are entering their peak earning years, but there are ten million fewer of them than Boomers at the same age.

Demand for custom homes is already shrinking and the demographics dictate that it will continue to shrink during the 2020s. The twist is the impact all that will have on production housing. Not a bird or a plane, says Zillow—it’s the “Silver Tsunami.” 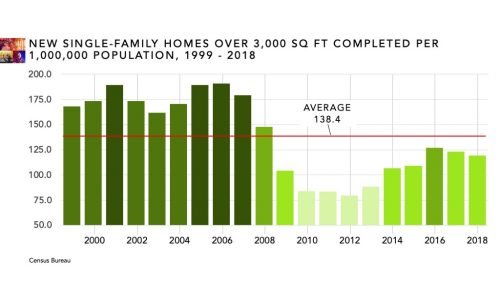 Right now one out of every three owner-occupied homes is owned by someone over 60 years old. As Boomers either kick the bucket or fall asleep in their soup and get carted away, “that could represent upwards of 20 million homes hitting the market through the 2030s.”

65.5 million GenXers aren’t enough to fully fill the void. The Millennial generation (early 20s to late 30s) and Generation Z (grade schoolers to early 20s) are each big enough—72.5 million and 75.1 million respectively. But even if they could afford it, most of them would rather eat glass than live in a McMansion.

So let’s do the math. If 20 million Boomer-owned homes will get dumped onto the market between now and 2040, that’s a million homes per year. Some Boomers will trade one home in on another, but others will die or move to institutional housing. We’d need an actuary to figure out how many and when, but ultimately it’ll be a 50-50 split: a trickle at first and a flood at the end.

That means that on average, 500,000 housing units will be vacated and added to inventory each year for the next 20 years—on top of however many units we build.

The rule of thumb is that we need 1.5 to 1.6 million housing starts per year to keep up with population growth. 1.5 million starts plus the Silver Tsunami effect equals 2.0 million new units added to inventory each year.

Plus, Casey believes marketplace pressure for affordability will lead to a new niche business buying up McMansions and remodeling them to create multiple housing units for sale or rent. If 10% of them get turned into duplexes, that’s an additional 50,000 units per year.

If all goes well with the economy (i.e., assuming some bonehead doesn’t put us in a recession), we could easily be overbuilt by the end of the decade and still have more than 500,000 new housing units coming online each year through the 2030s.

In other words, we may go into 2030 needing no more than 1.0 million starts per year to keep up with population growth.

Don’t let that put you off your panel plant if you need one, though. Casey says the overriding theme for high-volume builders during the 2020s will be productivity improvement. A 2017 McKinsey Global Institute study found that the inflation-adjusted dollar output per construction worker is no higher today than it was in 1937. That probably stung.

It means prefab is likely to be a thing even if we’re only building a million homes per year. That may not mean panelization, though. Framing accounts for just 10% to 15% of total build time even when you stick frame. Most builders aren’t convinced that the time savings from panels justify the 8% to 10% premium they’ll pay.

In some markets, precut packages like BMC’s Ready-Frame or pre-built assemblies (e.g., headers, corners, and partitions) may gain more traction. They won’t save as much time as panels, but they also don’t command a premium (and the investment to get into the business is minimal). 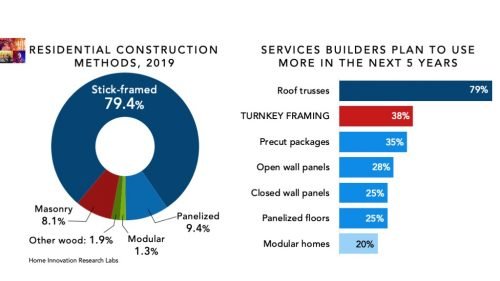 Closer management of jobsites is also coming. Casey says to look for “industrial engineering focused on waste reduction in time, materials, and labor,” with some builders even “bringing critical labor components in-house vs. total subcontract.”

Craig Webb of Webb Analytics thinks we’ll see more suppliers and subs partnering up to provide turnkey framing services. “Increasingly, you’ll be the builder—out of necessity. Big builders will become less likely to hire you if your value proposition is based solely on selling and delivering goods.”

Casey cites Ripon, Calif.-based Entekra as the model. Entekra builds components and installs them, but CEO Gerry McCaughey will tell anyone who will listen that the company is first and foremost a design and engineering firm.

LBM dealers do upfront design and engineering for their clients, too. They call it value engineering. But dealers focus strictly on the structure; Entekra addresses both the structure and the mechanical systems, along with any other bottlenecks or conflicts it finds along the way.

McCaughey can put up a dried-in shell 70% faster than stick framing, but that only translates into a 10% reduction in build time. The upfront design and engineering work Entekra does helps the plumbers and electricians and HVAC techs get in and out on time, which in turn helps to avoid the cascading delays that turn a 100-day project into 200 days.

Over the years, the trend toward subcontracting everything has lowered builders’ costs, but also scattered accountability. Each supplier and sub is responsible for his or her own portion of the project. As homes have gotten more complex, pulling all those elements together has become more difficult.

So the big question is whether the pain is great enough to put a dent in the long-standing adversarial relationship between builders and their suppliers and subs. Maybe not, but that’s the thing about trends: You can never say never.

Especially now, says John McManus, editorial director at Builder. “Today, an incalculable voltage of various plausible futures by far eclipses the meager potency of all we’ve come to know about what comes next. Are we on the brink? A precipice? Or are we on the trail-head of a great new adventure in which the power of humans, aided as never before by data, automation, artificial intelligence, nanotechnology, and quantum computing may render today’s thorniest challenges of cost and household means solvable?”

Hard to say. Chances are most of us will be satisfied if the delivery goes out on time and the framers show up.

1 thought on “Some trends matter, others don’t”