Paul Deffenbaugh at Modern Trade Communications posed an intriguing question on LinkedIn the other day:

Open discussion: How will greater acceptance of remote working affect the construction industry?

Probably so, but with a caveat: It might be that we’d build fewer freeways, office buildings, and college dorms, but we’d need more residential space. A dining room works as a temporary or occasional home office, but the privacy level in a dining room is typically a small step up from the food court at the mall.

Obviously it remains to be seen whether the pandemic will in fact lead to greater acceptance of remote working. The Bureau of Labor Statistics says one out of five employees work from home “on an average day,” says WSJ. A 2019 Zillow survey found that 56% of recent home buyers “work from home at least one day a week.”

The sweeping transformation Deffenbaugh is talking about would only occur if a significant percentage of the labor force worked exclusively—or at least primarily—at home. Apparently the financial impact of that arrangement is a well-kept secret. 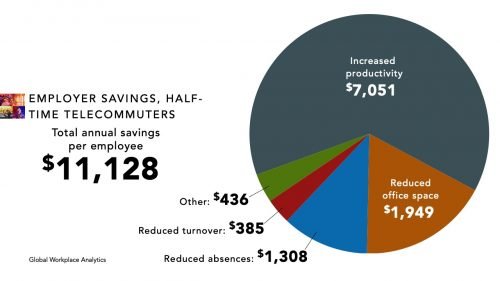 According to Global Workplace Analytics (GWA), just 3.6% of employees in the U.S. spend more than 50% of their time working from home. When they do, their employers save over $11,000 per year per worker.

Part of the reason may be that employees win, too. If they work at home full-time, says GWA, they capture “more than $4,000 in savings each year thanks to reduced expenses on things like gas, parking and public transit costs, and dry cleaning.” Not to mention personal time. “By not having to go into the office every day, workers gain back the equivalent of 11 days per year.”

A Stanford University study says remote work is so attractive that “job applicants are willing to take 8% lower wages for the option of working from home.” Nor is it just a pipedream. In a 2019 study, a whopping 99% of telecommuters said they want to do it for the rest of their careers.

Obviously not every job is suited for telecommuting. But by GWA’s calculations, 56% of the workforce could work from home at least part of the time based on what they do and how it can be measured.

All of which leads to an obvious question: Why aren’t more employers doing it already?

Blind faith and bad management, says Kate Lister, GWA’s president. Employers don’t believe employees will work if they aren’t on site at a physical workplace—and conversely, believe that if they are on site, they must be doing their jobs. 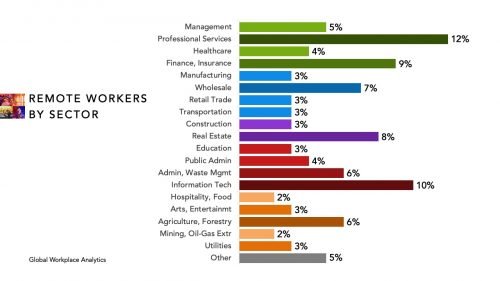 Lister is convinced that the pandemic will force the issue. “The longer people are required to work at home, the greater adoption we will see when the dust settles. Our best estimate is that we will see 25% to 30% of the workforce working at home on a multiple-days-per-week basis by the end of 2021.”

If she’s right, the number of Americans working from home would grow from 5.8 million B.C. (before coronavirus) to 40.7 million. Or maybe more accurately, shrink to 40.7 million.

Either way, that’s a big number. Big enough to have an impact on construction activity.

On the commercial side, a 12.2% office vacancy rate in Q2 2019 was “the lowest level in 18 years,” says National Real Estate Investor. If 35 million employees stay home after the pandemic ends, that problem is solved.

Hotel occupancy rates typically run just over 60%. After falling to 54.6% in 2009, the rate crept up steadily, cracking 65% by 2015. That’s tight enough to encourage hoteliers to build more properties, but if a lot of business travelers continue to use Zoom after the pandemic—which seems likely if only for the cost savings—it’ll be a while before we need more capacity.

Many remote workers will find that they can work from home most of the time even if they can’t give up days in the office entirely. If so, employers will quickly figure out that they can double up offices and reduce the amount of space that has to be leased.

Other workers will be able to stay home 100% of the time. That’s likely to boost remodeling significantly, but many of them will also realize they can improve their standard of living by moving out of major metro markets altogether.

The long-range effect will be to improve affordability in high-cost urban areas by reducing demand for housing. That would tend to undercut home values in those urban areas, possibly to a point where declining would drive people out of the market. At the same time, secondary markets that attract remote workers will see property values rise, along with demand for services and the taxes to pay for them. Over time that would reduce the prosperity gap between urban and rural areas—which is arguably the most crippling long-range problem the U.S. faces.

Obviously there’s no guarantee any of this will actually happen. But between strong employee demand and significant financial benefits to employers, it’s a safe bet that remote work is on a lot of people’s radar screens these days.