November jobs reports for both the U.S. and Canada came out Friday, and proved that it is possible to be neighbors when you live on different planets.

You won’t be surprised by the reaction. The New York Times called it “a jobs report without silver linings.” Fox Business warned that November is just the “tip of the iceberg unless a COVID-19 relief package passes.” In a CNBC report, economists’ responses ran the full gamut from “pretty ugly” to “this feels like the calm before the storm.”

Meanwhile, Canada added 62,100 new jobs in November. That number was down 75% from August, which in turn was down 60% from June. But the storyline was completely different. 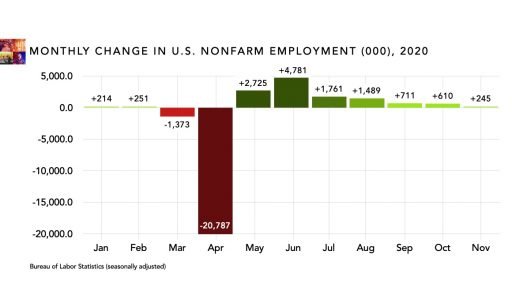 “Canada’s labor market continued to outrun COVID in November,” an economist at CIBC Capital Markets told Reuters. RBC Financial Group praised the “better-than-expected” report and expressed optimism that “while the next several months will likely still be difficult,” soon-to-be-distributed vaccines are “a light at the end of the tunnel for those off work, and for the businesses that employ them.”

Like Sweden and Brazil, the U.S. has taken a comparatively lassez faire approach to the pandemic: no nationwide lockdowns or mask mandates, limited (and soon-to-end) relief measures, and an emphasis on personal autonomy over collective safety.

Canada has responded more like Western Europe, with the same kinds of measures American Democrats would like to see: nationwide restrictions and strong, ongoing protection for everyone who is out of work because of the virus.

There’s no point arguing which approach is right or wrong; nobody is switching sides, anyway. It is worth asking who’s getting better results. 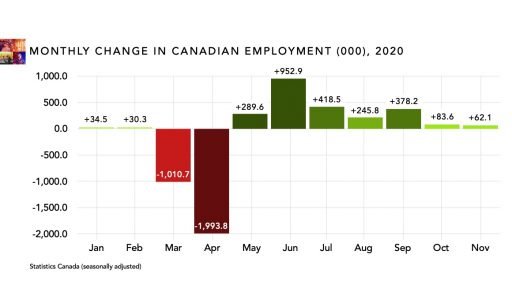 But if you thought that would prove a point, you’ll be disappointed. Through November, the U.S. has recovered 56% of the jobs lost in March and April while Canada has regained 81%. On the other hand, Q3 2020 GDP in Canada was down 5.2% YoY while the U.S. was down just 2.9%.

If one country manages a pandemic successfully while another one doesn’t, you would think the difference would show up in economic performance. In this case it’s not even clear who has handled the virus better, let alone whose economy is closer to full recovery. When you chart 2020 job growth in the U.S. vs. Canada, you can’t tell which is which without putting your glasses on.

The only difference that stands out is that Canadians think the light at the end of the tunnel is sunshine while Americans see an oncoming train. Fortunately for us, the battle against COVID won’t be won or lost with optimism.