That was a close call. We were running out of excuses for pessimism until the April jobs report came out last Friday.

266,000 would be a healthy monthly gain under normal circumstances. But we lost over 22 million jobs in March and April of 2020. So far we’ve regained 14 million of them. That’s impressive, but still a long way from square one.

What makes analysts nervous is that the obstacle to job growth is the opposite of what they expected.

“In a red-hot economy coming out of a pandemic and lockdowns, the country is in a striking predicament,” says the Wall Street Journal. “Businesses can’t find enough people to hire.” 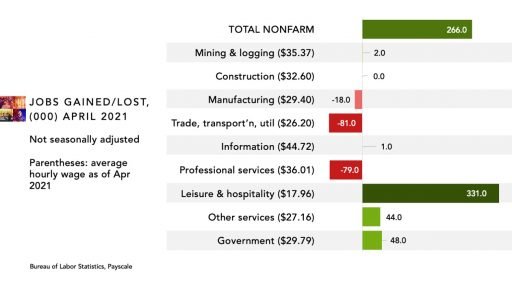 Surveys suggest a variety of reasons why Americans aren’t rushing back to work. Some are still afraid of catching COVID, including older workers who are retiring to avoid exposure. Others have been hit by supply chain snafus—e.g., construction workers who aren’t needed because the lumber shortage is forcing builders to back off. For still others, it’s simple logistics. The number of women in the labor force actually fell by 64,000 in April, partly because schools and day care centers haven’t reopened and they have no other child care.

It’s also possible that the issue is imaginary. Job growth numbers are seasonally adjusted. It might be that adjustment factors that work in a normal environment don’t work in this one.

But one possible explanation has been sucking up all the media coverage: Maybe the federal government’s $300 supplemental unemployment benefit is so generous that it enables slackers to stay home and game the system.

“With the $300 supplement that’s currently in place until September, about half of workers have a higher income from unemployment benefits than they would have from working,” says Michael Strain of the American Enterprise Institute. “I think it’s just common sense that with unemployment benefits that are that generous, workers are going to take longer to search for a job than they otherwise would.”

No disagreement here. If I could make more money collecting unemployment, I wouldn’t be in a hurry to go back to work, either. Nor would you want to hire me if I was. Anyone who would take a pay cut to go back to work is clearly lacking either a self-preservation instinct or math skills, and wouldn’t be an asset to your business.

But Strain’s claim that half of American workers are in that boat feels like it has to be exaggerated. Are unemployment benefits really that generous? Let’s look. 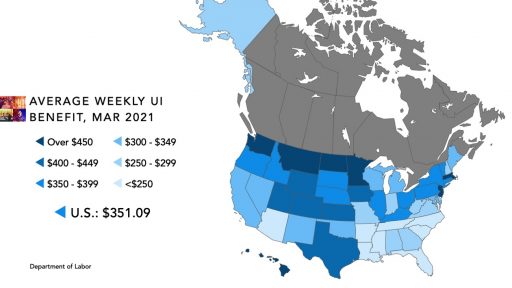 Unemployment insurance (UI) benefits are managed by the states and vary widely from one to the next. In March, the average payout (not the maximum allowed) ranged from $489.93 per week in Massachusetts to $187.93 in Louisiana.

The average hourly wage is at least 60% higher than that in every major sector of the economy except one: leisure and hospitality, which averages $17.96 per hour.

If anyone is going to make more money on UI benefits than they would on the job, it’s front-line employees at hotels, restaurants, and bars. Except they didn’t do that. Instead, they went back to work en masse; the leisure and hospitality sector added 331,000 new jobs in April.

Obviously there are low-wage workers scattered across other sectors. At last count, 58.3 million Americans—a whopping 43.7% of the workforce—earn less than $15 per hour working full-time. If you ever wonder why people are so pissed off these days, this might be a clue.

Certainly there are people who hit the gap just right and make more money on UI benefits. The U.S. Chamber of Commerce believes the number is one in four, not half as AEI’s Strain claims. But no one actually knows the real number. That makes the issue a perfect political football.

At one end of the spectrum, the Chamber’s Neal Bradley calls unfilled jobs “a very real threat” to the recovery. He insists that the $300 supplemental benefit needs to end because the April jobs report “makes it clear that paying people not to work is dampening what should be a stronger jobs market.”

At the other end, Sen. Bernie Sanders insists that any blame for sluggish job growth lies with employers, not the government.

“We don’t need to end $300 a week in emergency unemployment benefits that workers desperately need,” argues Sanders. “We need to end starvation wages in America. If $300 a week is preventing employers from hiring low-wage workers, there’s a simple solution: Raise your wages.”

Those are fighting words for a lot of employers, but no one can argue with the fact that a strong job market gives workers more choices. So let’s feel the Bern for just a minute and explore what that means.

The current federal minimum wage is $7.25 per hour. My wife and I made a pretty good living on $7.25 per hour—in 1978. Today, a 26-year-old male in Denver with two kids and a wife working as a full-time Mom needs to earn $36.41 per hour just to make ends meet, according to MIT’s Living Wage Calculator. 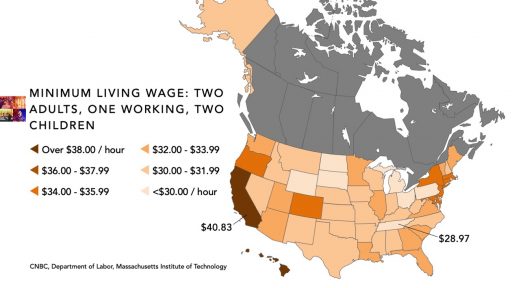 Fortunately, minimum wage isn’t relevant to most construction suppliers. Except in rare cases, everyone in the company is already well above that level. But if you ask dealers how much their employees should be paid, the most common answer is the market rate for that job.

That works when you’re talking about salespeople. As a rule, they’re committed to the construction supply business; that’s where their expertise and earning power lies. Other LBM dealers are your only competitors, so all you need to do is pay similar commissions, create a reasonably pleasant work environment—and most important, provide yard-warehouse support at levels that keep builders satisfied.

When breakdowns occur, they’re usually in yard-warehouse operations. Nearly all LBM dealers have higher turnover in the yard than they do in sales, and that’s okay up to a certain point.

The question is, What is that point?

In the yard, you’re competing against every employer within commuting range who hires people to handle and deliver products. It’s all but impossible to identify a fair market wage, and if you’re out of line, typically the only indication you’ll get is that turnover will creep up.

Top-performing dealers don’t have that problem. Yard turnover is still higher than in sales, but they have a strong core of career professionals in the yard. As a result, service levels are both higher and more consistent.

There are any number of ways to achieve that kind of stability, from above-market wages to performance-based pay, exceptional benefits, or ESOPs and co-ops that give front-line workers a share of ownership in the company. None of them needs to cost more money.

Dealers who have that strong core say higher productivity more than offsets the additional payroll dollars. Plus, it’s easier to manage 45 people who earn $65,000 per year on average than it is 65 people at $45,000. Most employers won’t make this leap, so a lot of those 45 people could never find another $65,000 job. They’ll work hard to keep this one.

The trick is to control turnover: Treat your best drivers and load-builders the same as you treat top-performing salespeople, but also let the slackers wash out. Usually you won’t even have to do it yourself—peer pressure will drive them away.

Raising wages without getting anything in return might jumpstart job growth in some industries, just as cutting benefits to force people back to work might goose others. But if your business relies on knowledgeable, engaged employees, you probably need a more sophisticated approach. If so, it’ll serve you well when this is all over.

Right now it might even give you a measurable competitive advantage.