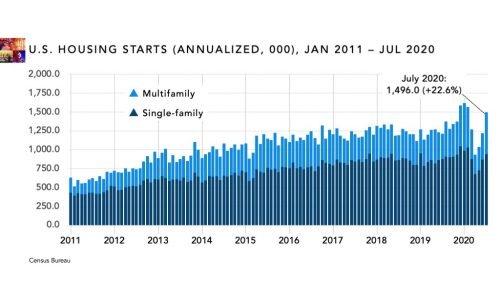 No wonder builder confidence just hit an all-time high—builders are so busy there’s no time to be depressed.

U.S. housing starts rose a surprising 22.6% in July. 1.496 million (annualized) not only blew the consensus forecast (1.24 million) out of the water, it’s enough volume to qualify as a normal housing market.

Not everyone got a trophy. The Northeast and South regions went crazy: up 35.3% and 33.2% MoM respectively. Total starts only rose about 6% in both the Midwest and West, though.

Most of the action was in multifamily. Nationwide, single-family starts rose 8.2% while multifamily jumped 58.4%. Again, the increases were regional: June-to-July multifamily starts doubled in the Northeast and the South. The Midwest rose 21.0% while the West gained just 5.2%. 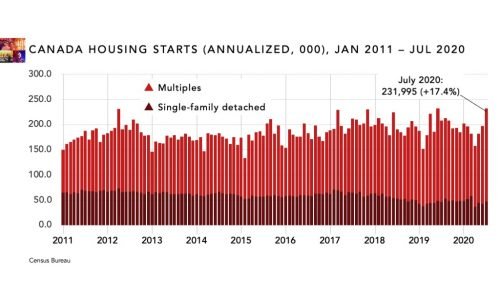 Multiples dominated as they have since the pandemic began: 184,431 in July vs. 47,564 single-family detached (SFD) starts.

At first glance, it seems curious that new home construction in both countries is surging at the same time—and defying conventional wisdom.

Actually the conditions in the U.S. and Canada are very similar in multiple ways: 1) rock-bottom mortgage rates, 2) a baby boom generation in the middle of its prime home-buying years, 3) job losses that whacked low-income workers but mostly left the rest alone, and 4) a pandemic pushing everyone to seek secure shelter. 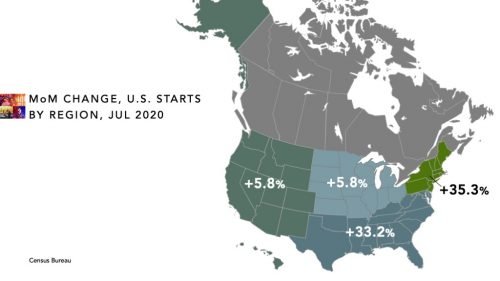 Demand has overwhelmed supply in both countries, and apparently nothing short of rebalancing the two is going to stop home buyers. Certainly rising home prices haven’t done the trick. Since the Great Recession, U.S. existing home prices are up nearly 80% while Canadian prices have more than doubled.

Even lumber prices seem be having no effect. The Chicago Mercantile Exchange’s lumber futures price has tripled since April. The Journal of Commerce reported the other day that Canadian home builders think rising lumber prices “will translate into $8,000 to $10,000 more to build a typical single-family house in Canada.” At this point buyers just don’t care.

It is possible that a wave of foreclosures might dump enough inventory on the market to put a crimp in the feeding frenzy. Since the end of Q1, the delinquency rate has tripled in both the U.S. and Canada.

On the other hand, the Q1 delinquency rate in Canada was only 0.29% according to CMHC. The U.S. rate in Q1 was higher—2.33%—and according to Black Knight, 4.1 million mortgages were in forbearance plans in June. 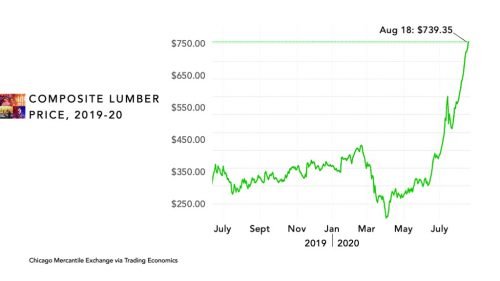 Many of those plans will expire in September, so we won’t know the outcome until we find out how many lenders grant extensions. Still, it seems unlikely that a wave of foreclosures would have more than a temporary impact on construction activity. In this environment, buyers would gobble them up and ask for seconds.

So if you want to feel sorry for someone, feel sorry for NAHB. The association saw the pandemic as an opportunity to check a long-standing item off its wish list.

NAHB is lobbying the Trump administration hard for a new softwood lumber agreement to end the 20%+ tariffs on Canadian wood shipments, and urging President Trump “to call on domestic lumber producers to ramp up production” (apparently on the assumption that producers haven’t already thought of that).

Chances are it’s going to be a tough sale. NAHB’s argument is that “skyrocketing lumber prices threaten the economy” by threatening to squash the housing boom. So far at least, that just ain’t happening.