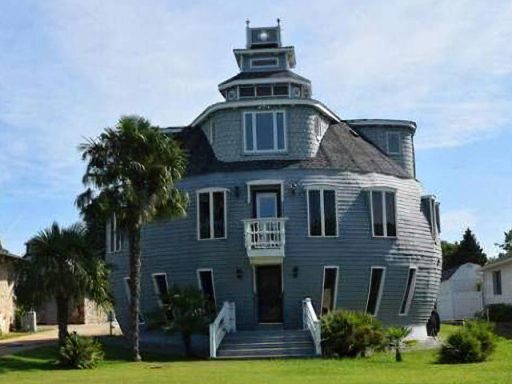 Real (inflation-adjusted) GDP fell 0.9% in Q2 2022 after a 1.6% decline in Q1. The rule used to be that if the economy shrank two quarters in a row, we were officially in a recession. Turns out that’s not the case.

“The official designation is determined by eight economists who serve together on the Business Cycle Dating Committee,” explains CNN Business. “The group works under the umbrella of the National Bureau of Economic Research (NBER),” which sounds like a government agency but is actually just a private nonprofit.

CNN says NBER “has yet to use the ‘recession’ label,” so give it up. The economy will be in recession when eight dudes with skinny black ties and pocket protectors say it is, and not before.

It doesn’t matter, though. We’ve got plenty to keep us busy while we’re waiting.

To avoid a recession (or get out of one—have it your way), we need to get inflation under control. To do that, housing costs need to come back to Earth. 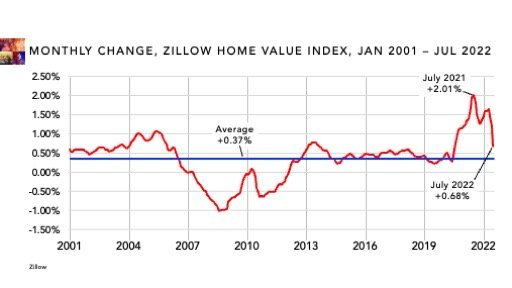 There is a catch, though. If the objective is to sell a lot of houses, simply preventing further price inflation probably isn’t going to be enough to get the job done. 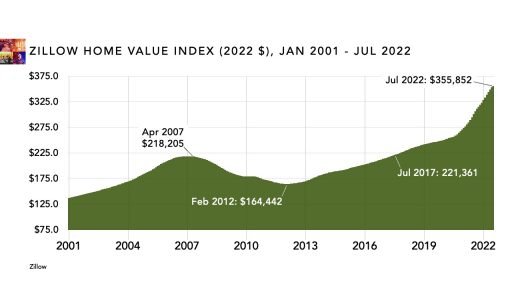 Median household income for the U.S. as a whole is $67,521 right now. But state medians vary widely, from $45,081 in Mississippi to $84,805 in Maryland. The Harvard Joint Center for Housing Studies recently analyzed Zillow home price data on over 900 markets and calculated the annual income required to qualify for a mortgage on a typical (more or less median-priced, but not precisely) home.

Among the top 100 housing markets, there were just three—Pittsburgh, Wichita, and McAllen, Texas—where median household income in that state was enough to qualify for a loan on a typical home.

The top 100 U.S. housing markets are by definition the most popular places to live. If roughly two out of three American households can’t qualify for a mortgage in the markets where most of the jobs are, that’s a problem. 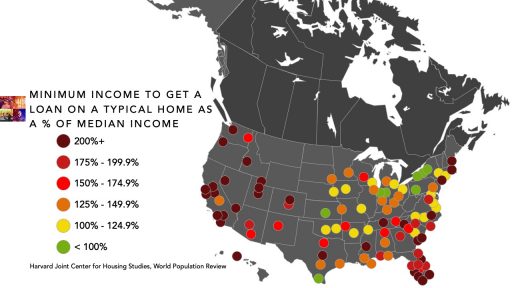 One caveat: The Joint Center calculated minimum qualifying income based on a 3.5% down payment and a maximum 31% debt-to-income ratio. Some buyers will qualify by putting more money down, and many would be able to handle payments that are substantially higher than 31% of income.

Home buyers in other countries do it all the time. We don’t see it as much here only because the U.S. is one of the most affordable developed nations on the planet to be a homeowner.

But that also means homeowners in other countries probably expect housing to be a significant financial burden. Americans don’t, and convincing us that everything is fine because we’re in better shape than France is likely to be a tough sale. 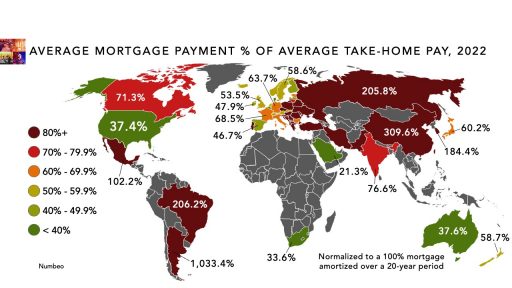 To revive the housing market—or at least the market as we know it—single-family homes need to get a lot more affordable. The questions are How much? and How?

When pundits talk about Housing Bubble 2.0, it’s usually just clickbait. It doesn’t mean they’re wrong; they might just be premature. It’s hard to say because analysts are all over the board right now.

Fannie Mac, CoreLogic, and Zillow all say we’ll continue to see YoY price increases, but in single rather than double digits. John Burns Real Estate Consulting, Zelman & Associates, and Zonda all believe home values will decline, but modestly. Burns is forecasting an 8% decline over the next two years, for example.

Fitch Ratings is more pessimistic, projecting a 10% to 15% decline. That has some people’s hair on fire. “The fact that Fitch Ratings even considers a 10% to 15% home price decline a possibility is alarming,” says Fortune. “Only the Great Depression and the Great Recession have seen price cuts of that magnitude.”

Scary stuff if you’re a homeowner. If you aren’t and want to be, chances are you’re cheering for the other team.

Which raises a question: Just how far do single-family home values need to fall to get the middle class back into the game? No matter which side you’re on, it’s hard to imagine that the market will recover with middle-quintile wage earners on the sidelines.

This is hardly scientific, but it might help give a sense for where the goalposts are. In July 2022, the median price of a single-family home ($403,800) was 431 times the average weekly earnings of a non-supervisory worker ($937.78). Everyone can agree that’s too high. Sales are falling right now, end of argument.

If so, that would be a 24% decline from the current median—almost exactly what we saw during the Great Recession.

No one is saying prices will actually fall that far (at least not yet). But however it plays out, the existing home market is unlikely to fix itself quickly. From the peak of Housing Bubble 1.0 in 2007, it took five years for prices to find a bottom.

If we don’t want to wait, we need to get more entry- and mid-level inventory into the market. Labor is a problem, but it isn’t a deal-killer. It’s just more profitable to sell homes in the upper price tiers.

Unless you can sell entire subdivisions at one time to cash buyers. Last year, D.R. Horton famously doubled its normal net profit when it sold a 124-unit single-family community in Texas to Fundrise, LLC, a private equity-backed single-family rental (SFR) investor. 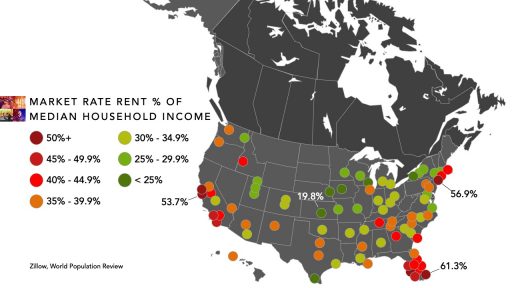 In 2021, equity-backed SFR investors accounted for slightly more than 6% of new home purchases in the U.S. according to Hunter Housing Economics. Now that the market has begun to slow down, corporate investors are backing off—temporarily. “They’re waiting for the market to slide so that they can buy at a lower price,” one broker told Bloomberg.

Single-family rentals have always been around, but until recently, SFR landlords were nearly all small, local operators. More than a few analysts argue that equity-backed corporate players are likely to get burned in SFR because the model doesn’t scale well.

They may be right. Recent analysis from ATTOM found that SFR net margins are less than 7% in the popular markets targeted by equity-backed buyers. Moreover, margins have fallen YoY in nearly three-quarters of the 212 urban counties ATTOM studied—despite the fact that average monthly rents are up nearly 34%.

To top it all off, four out of five single-family tenants tell pollsters they plan to buy a home just as soon as they possibly can.

With margins that low, it wouldn’t take a lot of vacancies to put those landlords underwater. Right now, rental vacancy rates are at a 25-year low according to the Census Bureau. That can’t last forever.

If returns continue to slide, it’d be no surprise to see equity-backed SFR firms start selling properties the same way they bought them—i.e., en masse. There’s nothing wrong with the existing home market that wouldn’t be helped by dumping a few thousand slightly-used homes into for-sale inventory.

If the objective is to get more inventory on the market, the other option is to build it. The obstacles here are labor and the supply chain. The Federal Reserve Bank of New York says supply chain bottlenecks are improving, but cycle times still have a long way to go before we get back to normal. 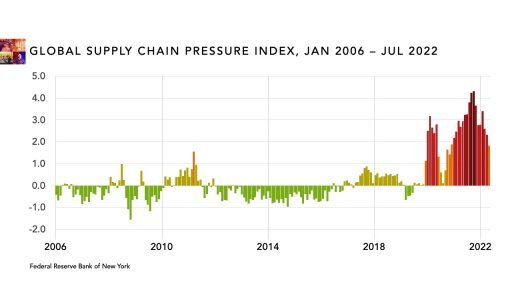 According to John Burns Real Estate Consulting, over two-thirds of dealers say project delays of one to six months are still common. The causes are split roughly 60-40 between materials and labor (either cost or availability).

In other words, it’s still a mess out there—and that could be the break that puts offsite construction back in the game.

Panelization can reduce framing time on the jobsite by as much as 70%. It all but eliminates the need for skilled framers, while CAD/CAM reduces production costs significantly.

Prefab works fine in multifamily construction. Single-family is still problematic for a couple of reasons: First, framing only accounts for 10% to 12% of total build time, and 17% to 18% of construction costs. Prefab might have a big impact, but only on a small slice of the pie.

Second, single-family builders are convinced that they need a variety of floor plans to make their homes marketable. More variety requires more engineering, and the cost of engineering eats up all the savings on the production side.

But prefab is evolving. The next generation of panelized components will include plug-and-play electrical wiring, plumbing pipes, and HVAC ducts installed at the factory. The systems are still in development, but will almost certainly be in the field before the end of the decade.

The rough mechanical phase accounts for about the same percentages of cost and build time as the framing phase, so modular mechanical components could double the savings from prefab with a minimal increase in engineering costs.

There is also reason to question the assumption that a wide selection of floor plans is a prerequisite to marketability. It has been, but consumer attitudes are a moving target.

The last time housing was this far behind the eight-ball was in the years following World War II, when Americans stood in long lines to buy new homes in Levittown and other low-cost subdivisions around the country.

Some of those homes were innovative, too. Levitt & Sons panelized for a while, and the second generation of Levittown homes was built with a load-bearing header across the entire back wall to facilitate room additions. But they were nearly always simple boxes, usually with gable roofs, typically no more than 1,200 square feet.

This is not to say that either prefab or 1,200-square-foot boxes are inevitable. But this is the kind of environment in which long-held assumptions suddenly become wrong and that’s worth watching closely.

Whenever someone stumbles onto one of them, the market can flip in a heartbeat.