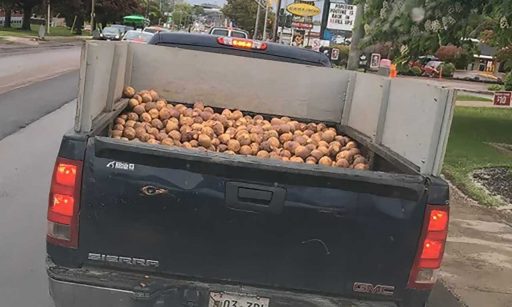 By now you’ve probably heard the news: McDonald’s announced that it’s launching a new chain of upscale steakhouses that will go head-to-head with Morton’s, Ruth’s Chris, and Fogo de Chao.

“I can’t wait,” gushed Jonathan Gold, a Pulitzer Price-winning restaurant critic at the Los Angeles Times. “McDonald’s has so much buying power that they’ll be able to get the very best cuts of meat at prices that will be unbeatable.”

Sound ridiculous? It should, even if you didn’t know Gold died in 2018.

McDonald’s actually did not make any such announcement. But if it had, no one who understands the first thing about the restaurant business would think a fast food chain poses a threat to Morton’s. Anyone who believed otherwise would be suspected of recent accidental egress from a turnip truck.

You would think the same reasoning would apply to the housing industry. You would be wrong.

New home sales in September were down 17.6% YoY while single-family housing starts were off 18.5%. That means trouble for builders, says John McManus of The Builder’s Daily. He cites a survey suggesting that builders’ gross margins could fall by 5% to 10% as the market sinks.

It may not be easy to see how that constitutes a catastrophe. 2021 was a windfall year for just about everyone in the housing industry, and no one cleaned up more thoroughly than the largest production builders.

In 2021, the net profit margins earned by the top ten publicly-held home builders were up 64.8% on average vs. 2019. Lennar more than doubled its net margin; Toll Brothers was the laggard of the group with a mere 20% increase. 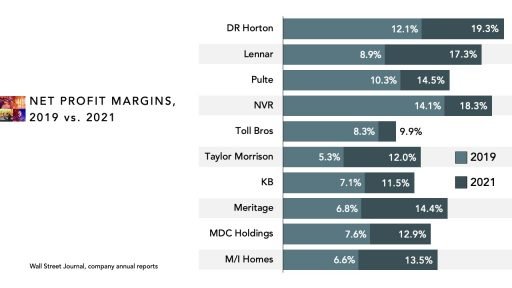 After a year like that, it takes a sophisticated observer to explain how builders could be in trouble so soon. Here’s McManus:

“Having to overcome market air pockets forming around consumer payment shock and a widening ‘falling-knife’ psychological wall of worry, homebuilders have little choice but to find ‘market-clearing’ catalysts they can trigger—i.e., price drops, incentives, concessions, discounts, etc.—trading off bigger and bigger chunks of margin to move homes off their balance sheet so that they can limit damage to project and entity-level financing and ongoing access to capital.”

Okay, so they have no choice. But it’s also hard to imagine that anyone else in the industry is sitting on unneeded piles of cash. Except there apparently is someone, says McManus.

“Five times in the past three weeks, homebuilders have whispered to me that they are getting great deals from the Pro Desk at Home Depot and Lowe’s. In one case, a builder told me he saved $23,000 on a lumber pack from Lowe’s versus Builders FirstSource. That’s huge.”

Yes it is. Huge enough to be worth a closer look, in fact. 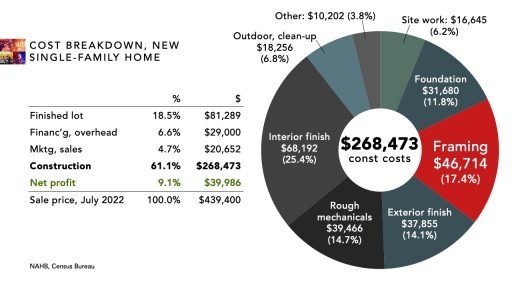 But NAHB’s latest data is for 2019. Lumber prices have doubled since then, so we need to make adjustments.

Is it possible? Sure it is. But if it did happen, chances are it’s not a devious strategy to steal market share from BFS. The more likely explanation is a misplaced decimal point.

Both Home Depot and Lowe’s are in fact pushing hard to build their business with contractors. “An individual contractor or a father-and-son team, we might have virtually all of their wallet,” Depot president and COO Ted Decker recently told CNBC. “The bigger the pro gets, though, we tend to be more of the fill-in purchase.”

It’s no surprise that fill-in suppliers would rather be primary suppliers. But this is far from the first time warehouse retailers have tried to break into the new home market. Over the past three decades, Depot in particular has made multiple runs at single-family builders’ business.

In the 1990s, it tried to sell framing packages out of its stores under a program called Home Depot Direct. Builders complained that they couldn’t get deliveries in a timely manner because packages were sitting in the queue behind homeowners’ orders, and eventually the program petered out.

Three years (and a few billion dollars) later, Depot sold the works to Bain Capital. Bain killed the LBM division, added Hughes Supply to the mix, then rebranded the company under the name HD Supply. Home Depot bought it all back in 2020, but HD Supply remains focused on the MRO market.

Now Depot is spending its spare change—$1.2 billion according to CNBC—to build a network of what it calls “flatbed distribution centers” dedicated to bulk packages for home builders. CNBC says four of the new DCs are up and running in Dallas, Baltimore, Newark, and Miami, with three more about to open in Atlanta, Houston, and Tampa.

Will it work this time? Some certainly think so.

McManus reports that “one executive with close ties to both the homebuilding enterprise sector and its distribution channel believes that Lowe’s and Home Depot may consider now the moment to encroach on turf Builders FirstSource, US LBM, and ABC Supply currently hold, not just to grab share, but to align themselves as beacons of strategic capability as the channel takes shape over the next few years.”

Trouble is, the channel is already up to its ears in beacons of strategic capability.

Independents provide a broad array of construction support services tailored to the quirks of their markets. They’ve never had buying power to match BFS, US LBM, or ABC Supply. Their advantage is the ability to respond quickly and precisely as each individual market evolves, and use that maneuverability to help builders preserve profits.

Sometimes that’s enough to counteract lowball prices and sometimes it isn’t, but independents who are dedicated to the production builder market have generally done well vs. chain operators. That’s why BFS and US LBM are so eager to acquire them.

It may be that Depot and Lowe’s will push prices down even further than the pro chains. If so, the question will be whether they can do it without sacrificing their own gross margins. If not, the entertainment value of their quarterly earnings calls is likely to rise exponentially.

But one thing this business teaches you (sometimes the hard way) is that you can never say never. McManus’s unnamed executive source speculates that “with access to data and systems they’ve got now, they may have figured out ways to offset that challenge.”

On the other hand, that’s the kind of endorsement you might want to take with a block of salt. Whenever the answer to a question is Yes, but technology, it almost always means your source has painted themselves into a corner.

One way or another, everyone knew the market was going to get extremely price-sensitive once the downturn kicked in. It’s here now, so if you’re in the production market, it’s time to batten down the hatches.

But then break out the popcorn. Whenever someone gets serious about buying market share, it’s always fun to watch the moment when they realize they were only renting it.