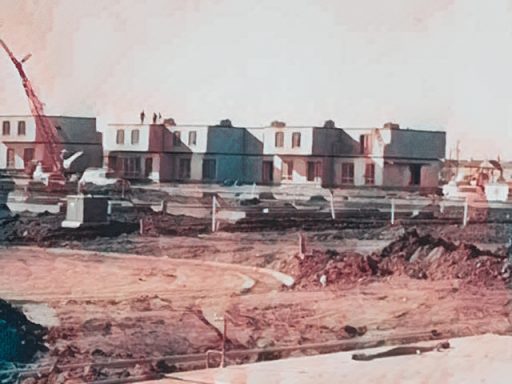 U.S. housing starts fell for the fifth consecutive month in October, landing at 1.425 million annualized. That’s still well above the pre-pandemic total (1.29 million in 2019) but down 8.8% YoY.

October existing home sales data came out earlier this week and media outlets are busy doing what they do best: count to ten or less.

WSJ, Bloomberg, and CNBC are well-known as authoritative sources of economic news. The New York Post, not so much. This time around, though, the Post got the story more right than any of the other three. 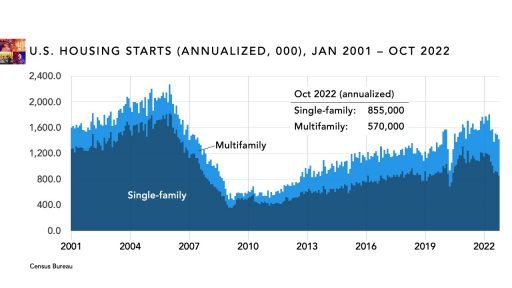 Mortgage rates were part of the story, but back in February when sales began to fall, the average rate on a 30-year fixed loan was just 3.76%. The rate never cracked 5% until May and remained below 6% until September.

According to the National Association of Realtors, the nationwide median sale price of an existing single-family home was $350,000 in January. In October it was $379,100.

Prices have started to fall in a few hyper-inflated markets like Austin (-10.2% from the peak), Boise (-7.1%), and Las Vegas (-6.9%), according to the Zillow Home Value Index. But we haven’t seen anything to indicate the kind of broad-based 20% decline that many analysts say is coming.

Nor is there any guarantee that a 20% drop in home prices would be enough to jumpstart the market. 20% takes the median down to $303,280. That’s about where we stood in January 2021. The market was strong then, but the average mortgage rate was 2.74%.

Everyone says the core problem is that we don’t have enough houses, which is to say that the solution is to build more of them. But that may be tougher than it looks. 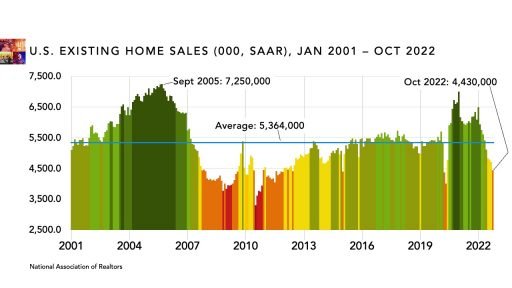 As of September, the median price of a new single-family home was $470,600. Getting to $300,000 would require a 36% reduction in the median price. That doesn’t mean we can’t do it. A median is just a midpoint: 50% of the units are higher-priced, 50% are lower. All it takes to bring the median down is to build a lot more low-priced homes.

But the barriers to entry-level construction—labor, land, and regulation—are not insignificant. People talk about offsite as a solution, but panels actually raise builders’ hard costs and the cycle time savings affect less than 15% of the construction process. Affordable single-family homes would probably require significant reductions in lot sizes, square footage, amenities—and, most likely, builders’ profits.

So what if builders can’t or won’t make a major commitment to entry-level housing? In the past, the government would step in. The Department of Housing and Urban Development was formed in the late 1960s specifically to address a looming shortage of housing as young Baby Boomers came of age.

The chances of that happening in today’s political environment are slim and none, though. One alternative is that the U.S. market could trend in the same direction as Canada, Japan, and European nations where housing affordability has become a permanent problem.

It’s impossible to make apples-to-apples comparisons from public data, but by all accounts, Canada’s affordability problem is more severe than ours. Black Knight says the average U.S. payment-to-household income ratio is currently 38.9%. That’s “the highest such share since 1984,” says Black Knight, “and well above the long-run average of just under 25%.”

So it’s probably no surprise that three out of four Canadian housing starts are multifamily units. 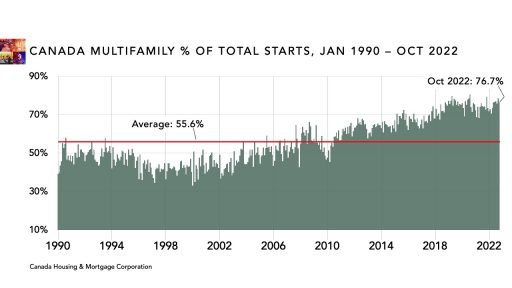 Multifamily’s share of the Canadian market has always been higher than the U.S. because of differences in how the two define single vs. multifamily. But it wasn’t that long ago that the majority of Canadian housing starts were single-family units. The Great Recession pushed the market past the tipping point and it never came back.

Not everywhere, of course. If you’re in Winnipeg, you may not be sure what all the fuss is about. The Canadian Real Estate Association says the median home price in October was $337,400 ($251,906 USD).

But the same goes for the U.S. You can buy a home in Birmingham, Ala. for about what you’d pay in Winnipeg. Go to Seattle and you’ll pay Toronto prices. The U.S. is more affordable than Canada overall, but it ought to be—we’ve got a lot more Birminghams than they do.

Since 1959, multifamily housing starts in the U.S. have averaged 28.8% of the total. In October, they accounted for 40% of starts. That’s not quite an all-time record—the peak was 48.6% in February 1969, as HUD was ramping up an program called Operating Breakthrough to fund affordable housing and spark innovation in the construction industry. But it is within shouting distance. 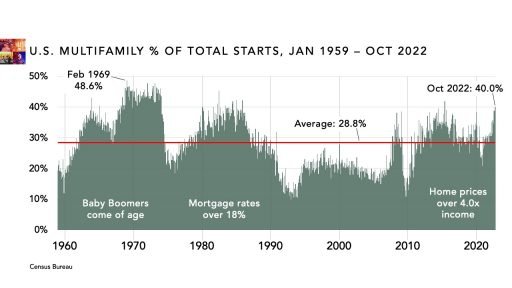 If the current trend continues, multifamily could account for over half of all housing starts as early as next year. If that shift became permanent, it would have a significant impact on how Americans live.

“When and if housing does revive, inflation is likely to cause one basic change in its pattern. Concentration on the freestanding, single-family home may well be over. The child who grew up in a one-family home in the 1950s and 1960s is likely to raise his children in a garden apartment, a condominium, a leisure-village quadruplex, or even a mobile home.”

That was Time magazine’s take on the situation—in October 1974. It was dead wrong, of course. The pendulum swung sharply back toward single-family in the mid-1970s, then back to multifamily as interest rates spiked in the late 70s and early 80s, then back again when the 1990s economic boom kicked in.

One open question is whether the pendulum will swing entirely on its own, or whether it needs a push.

In the 1970s, roof trusses and prehung doors went mainstream—partly due to Operation Breakthrough—and helped reduce construction costs. In the late 80s and 1990s, engineered floor systems, vinyl windows, and engineered wood products were among the innovations that drove affordability.

According to most economists, we’re headed for a recession in 2023. It will end, and when it does, the next period of prosperity might unleash a housing boom that makes single-family homes more affordable all on its own.