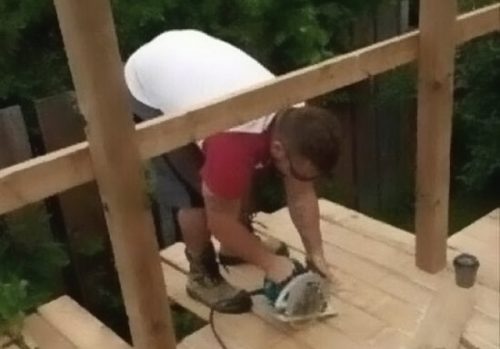 After a decade-long recovery that gave new meaning to the word “sluggish,” the housing market is finally starting to move. In the wrong direction. Through Q2 2019, U.S. single-family permits were down YoY for the first time since 2011. The annualized unit count fell 4.7% while the dollar value of those permits fell 6.1%.

Multifamily is better, but not much. Permits through the first half of 2019 are down 7.3% YoY. Permit values are only down 2.5% YoY, but the national numbers are misleading. Sixteen states are partying like it’s 2005 with multifamily values up at least 20% YoY. It’s 2008 all over again in 13 others, where values were down 20% or more in the first half of 2019.

Housing is clearly slowing down. The question is whether this is a sign of things to come in the general economy.

At 122 months, this is the longest economic expansion in U.S. history. That doesn’t mean a crash is imminent. Expansions don’t die of old age. Instead, policymakers do stupid stuff, confidence erodes, and eventually something happens that causes investors and/or consumers to freak out and run for cover. 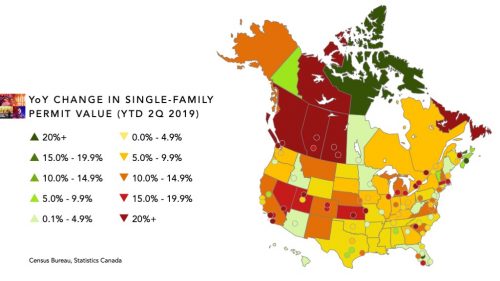 The catch is that consumers never know what’s coming until it smacks them in the face. Investors are a more reliable indicator; that’s why there’s been so much buzz about the Treasury bond yield curve. 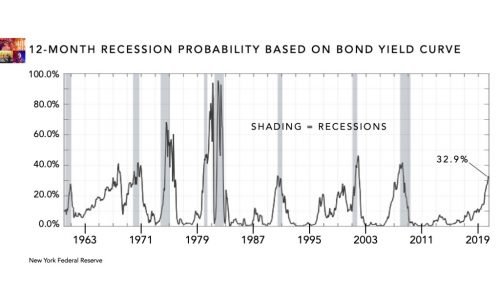 When long-term rates fall below short-term rates, economists call it a yield curve inversion. When the yield curve inverts and stays there—as it has since April—it means investors believe a recession is around the corner. They’re willing to accept lower rates on long-term notes because they’re anxious to find a safe place to park their money.

The Federal Reserve Bank of New York created a model that uses the difference between ten-year and three-month Treasury bond rates to predict the likelihood of a recession in the next 12 months. The model has accurately predicted each of the seven recessions that have occurred since 1961 (plus one false alarm in 1967). Right now it says the chance of a recession within a year is one in three.

That might not sound bad, but three of those seven downturns hit at a time when the odds were under 50%. The New York Fed’s model was barely over 40% when the 2008 crash occurred, and no higher before the 1990 recession than it is today. We’re apparently at a point where it wouldn’t take much to push us over the edge. 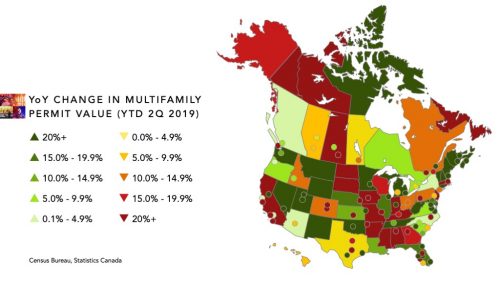 If the U.S. does go into recession soon, no one thinks it’ll be anything like the hair-on-fire crisis of 2008. Presumably it would look more like the 1990-91 recession.

Less business is never good business. A downturn might be valuable from a market intelligence standpoint, though. As Warren Buffett says, “It isn’t until the tide goes out that you find out who’s swimming naked.”

For example, a 26% dip in construction activity would tell you everything you need to know about how committed builders are to offsite construction “disruptors” like Katerra. There are good reasons to consider offsite as an alternative to stick framing. They aren’t getting a fair hearing right now, though. The value proposition behind offsite doesn’t mean much if you can’t find framers. Naturally offsite looks good when you don’t have a choice.

A housing slowdown will take care of that problem. But at least so far, there’s no sign that the value propositions have changed much since the debate began nearly a century ago—even with the addition of BIM and automated assembly. Components are still faster and more consistent; sticks are still cheaper and more forgiving.

In the past, speed was paramount when builders were selling as fast as they could build. When the market turned sluggish and margins came under pressure, cost became their priority. Maybe builders have changed. 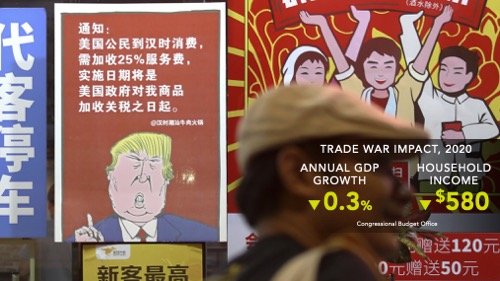 The political environment is an even bigger wild card. There is a real chance that Democrats will continue to make gains in 2020, and those odds will go higher if the economy slips into recession. If Trump loses his re-election bid, it’s a near-certainty that a Democratic administration would reverse course on immigration.

The unemployment rate in Mexico right now is 3.6%; there isn’t a lot of reason to migrate north even if the U.S. was welcoming immigrants. But Mexico is on the verge of its own recession, and 80% of its exports go to the U.S. A mild downturn here would be much more severe south of the border.

A 2018 NAHB analysis of Census Bureau data says that even though there are over 2.5 million immigrant construction workers in the U.S. right now, “this is still almost 200,000 immigrants fewer than in 2007.” Another 200,000 tradespeople would go a long way toward easing the so-called labor shortage.

It remains to be seen whether the industry will still be ripe for disruption if the pain of scarce labor goes away. Looks like we’ll find out sooner rather than later.