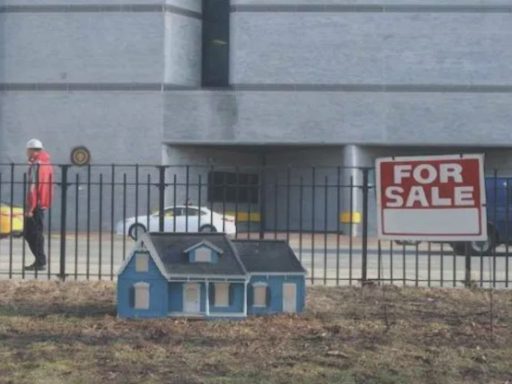 November data is in and there are no surprises in the U.S. housing market: Affordability is in the tank and sales are dropping like a rock.

In early December, Fortune polled 20 housing analysts on where home prices are headed. The range of answers tells you pretty much all you need to know about forecasters’ confidence right now. At one end of the scale, the National Association of Realtors predicts 5.4% increase in 2023. At the other end, John Burns Real Estate Consulting sees a 20% to 22% decline by late 2024.

Obviously price declines will be all over the board depending on where you go. The most inflated markets will take the biggest fall. Those that never saw steep increases probably won’t see steep declines.

That puts an interesting spin on the next housing boom. One thing everyone agrees on is that the U.S. is severely underbuilt. It follows that the solution is to build a whole lot of homes as fast as possible. The expectation that we’re about to experience the boom of a lifetime is the driving force behind consolidation among builders and suppliers both, as investors scramble to get a piece of the action.

The catch is that we may not be as underbuilt as we think we are.

A couple of weeks ago, Bloomberg published a county-by-county estimate of where homes are—and aren’t—in short supply. Its method was simple: In any county where median household income is enough to buy a median-priced home, Bloomberg assumed we have an adequate supply of housing. If the median home is not affordable but the vacancy rate is high (which implies downward pressure on prices), that was defined as mild undersupply—i.e., not ideal, but not bad and moving in the right direction. 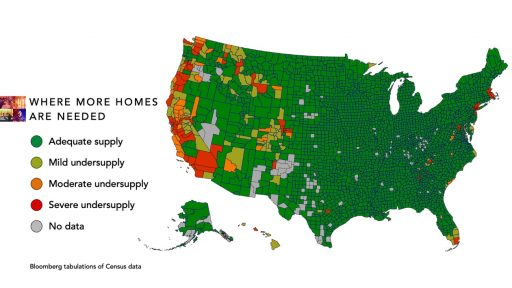 And guess what? If you agree with Bloomberg’s logic, the vast majority of the U.S. does not have an undersupply problem. Here’s the map:

We’ve got moderate to severe housing shortages in the most popular places to live, but beyond that, supply and demand are mostly in balance. There are a number of reasons why those places are so popular—e.g., climate, scenery, or big-city amenities. But the primary driving force is economic: The best jobs are concentrated in major metros that are the least affordable places to live.

We’ve run ourselves ragged trying to build more affordable housing in those markets. Frankly, we’re at an impasse. Chances are we could solve the skilled labor shortage, but that’s the low hurdle. Regulatory barriers are the tall one.

The Atlantic cites a recent study conducted to estimate “how much GDP and productivity the United States gives up by throttling the housing supply in its biggest cities.” The authors concluded that “if New York, San Jose, and San Francisco—just those three cities—had the permitting standards of Atlanta or Chicago, the economy would have been roughly $2 trillion bigger in 2009.”

This is all theoretical, of course. Researchers designed a computer model that assumed everyone in the country could move wherever they could get the best jobs and the housing supply would magically expand to accommodate them. In that scenario, the population of the San Francisco Bay Area would be five times what it is today. New York City would be eight times its current size while “the average city would lose 80% of its population,” says The Atlantic. 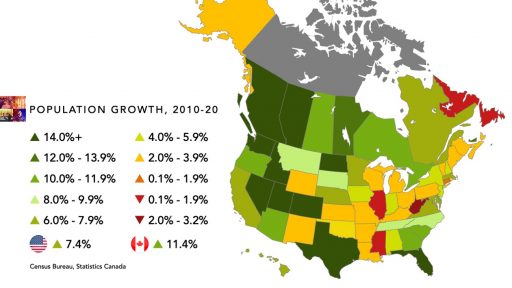 Obviously that’s never going to happen. It does suggest that our affordability crunch may resolve itself in a different way than anyone expects.

Rather than wait for home builders to increase production in markets where NIMBYs are fighting it tooth and nail, it may be easier for employers to move jobs to where housing is plentiful and affordable. Automakers have been doing it for years—e.g., BMW in Spartanburg, Mercedes in Tuscaloosa, or the soon-to-be “Battery Belt” between Atlanta and Charleston where five new factories will produce batteries for electric vehicles.

Now tech is getting in on the game, boosted by a $52 billion federal subsidy to jumpstart semiconductor manufacturing in the U.S.. Santa Clara, Calif.-based Intel just broke ground on a $20 billion fabrication plant in Columbus, Ohio. Boise-based Micron will invest $100 billion to build “the largest semiconductor fabrication facility in the history of the United States” near Syracuse, N.Y.

It’s not as sunny in Columbus as it is in San Jose, but according to MIT’s Living Wage Calculator, the cost of living is more than 40% lower. Chances are that will appeal to a few young workers, and proximity to Ohio State University will provide the specialized talent Intel needs.

From 2010 to 2020. the U.S. population grew 7.4%. But just 19 states beat the average, and 14 of them were either in the Southeast or west of the Rockies. Greater economic diversity would be beneficial for the country as a whole—not just in terms of overall prosperity but also to relieve political polarization.

Spreading the next boom around a little bit would also go a long way toward relieving distortions in the housing industry.