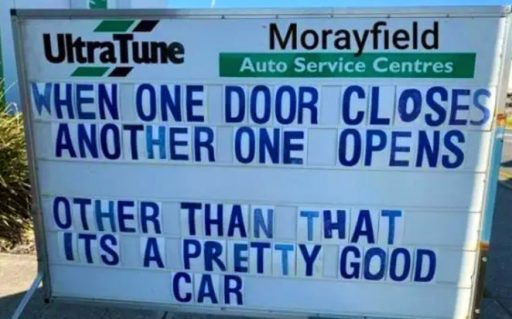 Too early to say whether this is a trend or a blip, but U.S. housing starts took an interesting turn in August.

Total starts fell 5% to 1,416,000 annualized. No surprise there. July was a banner month—the best since the pandemic began and the fourth best monthly total since 2006. The surprise was in the mix.

As a percentage of the total, multifamily fell to 27.9%. You may not be impressed, but it’s kind of nice to find anything in 2020 that remotely resembles normal.

Canada had a good month, too, but Canada has two settings: normal and more normal. Annualized starts in August were 248,154, up 16.8% YoY. Multiples made up 81% of the total.

The difference vs. the U.S. is affordability. According to data from the National Bank of Canada, the average mortgage payment for all types of properties is 42% of median household income. According to the Census Bureau, fewer than one out of four American homeowners spend more than 30% of their income on housing.

For condos in Canada, the average is 30%. That’s probably why multiples have  averaged about two-thirds of Canadian housing starts over the past decade.

Plus, the mix has drifted steadily toward multiples as housing prices have risen. You have to go back to the 1990s to find a time when single-family detached starts in Canada regularly made up more than half of the total.

In the U.S., four out of five people who intend to buy a home say they want a single-family home. 82% of single-family housing units are owner-occupied vs. just 11% of multifamily units.

Housing preferences may not be any different in Canada, but homes in the U.S. are more affordable than just about anywhere in the developed world. That might well explain why the mix of single- vs. multifamily starts are all over the board: We buy single-family to own and settle for multifamily only if we have to rent.

Those fluctuations may provide clues to the future direction of the U.S. housing market. Let’s take a closer look.

In the late 60s and early 70s, the newly-formed Department of Housing and Urban Development subsidized apartment construction to provide affordable housing for low-income households and up-and-coming Baby Boomers. Multifamily share hit a high-water mark in Feb 1969, but dried up immediately when the program ended and the government money spigot shut off. 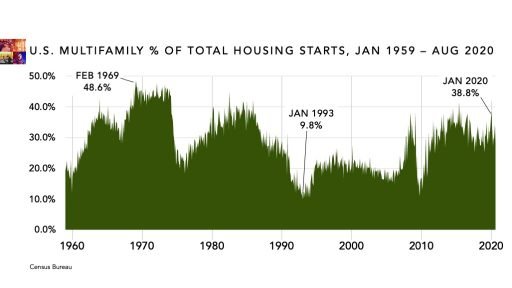 Multifamily bounced back in the early 80s when mortgage rates spiked to over 18%. Double-digit rates persisted throughout the decade and multifamily’s share of total starts remained elevated as a result.

Interest rates finally fell below 10% for good in 1990. By that point, Baby Boomers were entering their peak earning years. In the early 90s, the market pivoted sharply toward single-family homes. Multifamily’s share remained low until the housing bubble popped in 2007-08.

The actual number of multifamily starts has been relatively steady since the mid-90s, hovering around 350,000 per year. As a share of total starts, multifamily has been elevated since the last recession only because single-family starts have been lower than normal due to land and labor constraints.

The pandemic threw another wrench in the gears, but the COVID recession hasn’t hit everyone equally. Just 13% of workers earning $100,000 or more were laid off in March and April vs. nearly 40% of low-income workers, notes Yahoo Finance.

At this point Baby Boomers are aging out of the housing market. Affluent GenXers and Millennials are driving the bus, and they are having an impact.

Even though the median existing single-family home price has doubled since 2011, homeownership has jumped two full percentage points in 2020, from 65.3% in Q1 to 67.9% in Q2. The obvious catch is that the number of Americans with a secure six-figure income is limited.

The core problem is still that supply has fallen far behind demand. If you agree with Builders FirstSource’s analysis for its recent merger with BMC/Stock Holdings, the U.S. housing market is underbuilt by 4,800,000 units. That’s three full years’ worth of production. Even at full capacity it could take a decade or more to catch up.

If you’re a builder, your marching orders are clear: 1) Build homes as fast as you can, 2) make them affordable for younger buyers, and 3) build single-family if you want to sell them.

All this suggests that we’re likely to see a more polarized housing market when we finally emerge from the pandemic. Move-up and semi-custom won’t disappear, but they won’t be a dominant factor again until Millennials enter their peak earning years. That’s a solid decade or more away.

Dealers who have relied heavily on the move-up market may need to expand their focus in order to grow. The question will be Which direction?

The luxury market is always tempting. It’s a steady 10% to 15% of total starts, not overly price-driven, and not overly sensitive to boom-bust cycles. It’s also not easy to break in. If Alfred has the Batmobile running like a top, it’s hard to talk Master Wayne into a new butler.

Most of the action will be in the mosh pit: single-family production for everyone who can afford to buy, multifamily for those who can’t. Both are notoriously price-sensitive—plus, the price of admission is rising as offsite construction catches on.

If you choose that direction, the No. 1 problem that has plagued builders since the Great Recession will land squarely in your lap. 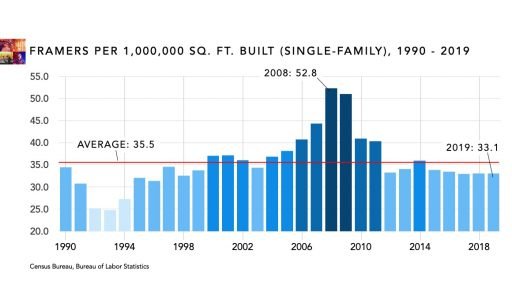 Everyone calls it a shortage of skilled trade labor, especially in framing. Actually we’ve got all the bodies we need. The ratio of framers to square feet built is only slightly below its 30-year average.

The real issue is a shortage of available labor due to an ongoing decline in trade productivity. One recent study found that the dollar output per construction worker is no higher today than it was in the 1930s.

There’s no arguing with the numbers. Multiple research studies have documented the decline in dollar output. But the assumption appears to be that output is falling because the quality of the workforce is deteriorating. That may not be correct.

It’s true that skilled journeymen are aging and the industry is struggling to attract workers to replace them. “Carpentry has a black eye because there’s a perception that it’s a job you get if you’ve dropped out of high school or have just been released from jail,” says Bill Irwin of the International Carpenters Training Fund.

But that doesn’t prove the quality of the workforce is declining. Dealers who have hired high school dropouts and ex-convicts for truss production lines say they’re as productive as anyone else—and often work harder because they have fewer options open to them.

Plus, there may be other reasons why output is falling. Poor jobsite supervision, inadequate pre-construction planning, and half-baked plans that force framers to spend time working out design details in the field also have an impact on output. The industry’s productivity problem may have as much to do with management practices as it does trade performance.

For the time being, it’s a moot point. The largest production builders have already decided to pursue offsite construction to reduce their dependence on trade labor, and others will follow their lead.

Suppliers will probably have to bite the bullet and make the investment. The wild card is whether builders will stick with offsite once the labor crunch eases up.

In the past, they haven’t. They’ll pay the premium for panels when they can’t find framers, but cycle time savings alone aren’t enough to hold them when the market shifts and labor becomes plentiful (and cheap) again. 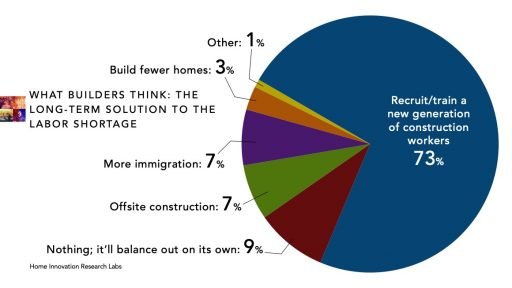 Unfortunately, the answer to that question is less than clear. On one hand, a recent survey by Home Innovation Research Labs found that 19% of builders are planning to increase their use of wall panels. But another recent HIRL survey asked builders what they believe to be the best long-term solution to the labor crunch.

Just one out of 14 chose offsite construction. Four out of five said the answer is to rebuild the pool of trade labor, either with young workers or immigrants.

There are still no signs that panelization is about to displace stick framing as the predominant framing method. According to HIRL, only 6% of single-family homes in the U.S. are panelized.

But this shouldn’t discourage anyone from getting into the component business. Panels’ market share jumps to 18% in multifamily construction. If you’re going to be in the production market at all, the fluctuating mix of single- vs. multifamily starts suggests that you should probably be in both.

Multifamily builders are less likely to back away from panels when the labor crunch finally eases up. Panels can also help get you into light commercial work, where the boom-bust cycles are different than in residential.

It’s true that panels just won’t fly in some markets. If not, a precutting/labeling system similar to BMC’s Ready-Frame, BFS’s Better Framing System, or Parr Lumber’s Opti-Frame is a second option.

The cycle time gains aren’t as substantial, but precutting keeps framers in the mix and avoids conflicts. Plus, the investment is under $200,000 vs. $2 to $3 million for a panel plant. 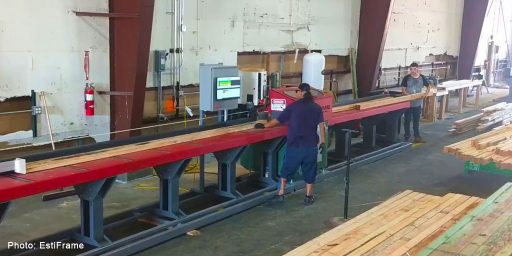 If even that won’t work, a computerized plate-cutting system like MiTek’s Hornet or EstiFrame’s EasyFrame saw is yet another option. The impact on cycle time is smaller yet, but you’ll save a little bit of time and eliminate a lot of framing waste. You can typically get into the business for less than $100,000. In fact, EstiFrame sells most of its systems to framing subs.

So what if you’re ready to dive into the deep end? The European approach to offsite construction is by far the most comprehensive.

Full panelization reduces jobsite framing time by as much as 80% (vs. 60% with wall panels) while the upfront engineering helps mechanical trades get in and out faster. Entekra claims that FIOSS can reduce total cycle time by as much as 33%.

The catch is the cost. Wall panels and precut framing packages typically command an 8% to 10% premium vs. stick framing. A fully-loaded FIOSS package can add as much as 20% to the cost of framing. There are ways to work costs down, but there are also some hard limits.

Offsite construction is still a hot topic in production housing, but offsite comes in a lot of different flavors. Unless the August shift toward single-family starts turns out to be a temporary blip, dealers will have some important decisions to make sooner rather than later.