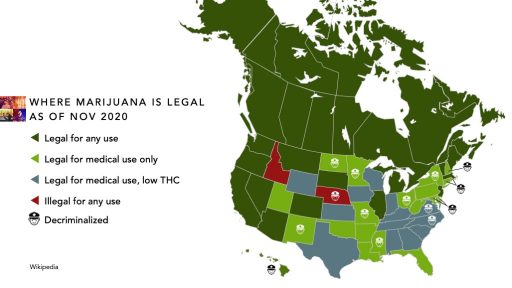 The 2020 elections were notable in a lot of ways, but so far no one seems to be paying much attention to the year’s real landslide: marijuana legalization. Maybe the press just spaced it out. Whatever, dude.

As of 2021, pot will be legal for recreational use in 15 states and legal for medical use in 33 more. The two holdouts may not last long. An Idaho ballot initiative to legalize pot got derailed by COVID, but one poll says 83% of Idahoans are in favor. Nebraska is still arguing, but it’s kind of a moot point. Simple possession of anything less than a pound is a misdemeanor, anyway.

The federal government is lagging behind as always. In early December the House passed a bill decriminalizing pot, but no one expects it to get through the Senate. 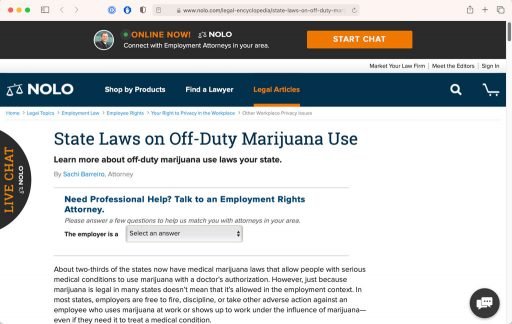 Throw in the fact that a standard drug test could come up positive even if the person hasn’t been high for a month and it’s no wonder HR execs are stressed.

Drug tests that measure impairment are coming, but so far there are no tests that everyone agrees are reliable. In the meantime, the best you can do is make sure your policies are inside the guardrails in your state. The Nolo Network has a good state-by-state summary of the rules for employers. To see it, click the image of the page or CLICK HERE.