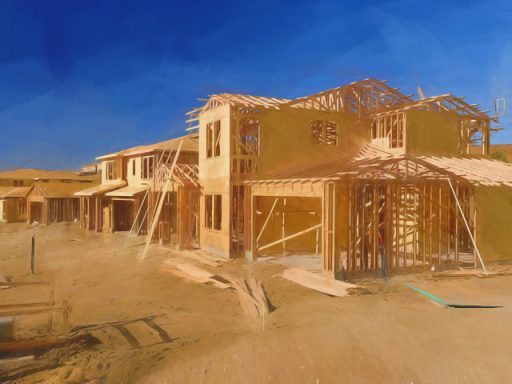 Normally life quiets down after Labor Day. Not this year. It’s been one five-alarm fire after another since the end of August.

President Trump waded into his deepest manure pile yet. The House launched an impeachment inquiry; the stock market promptly belly-flopped. Killer mosquitoes unleashed a new brain-eating plague that has killed eight people so far. Hurricane Dorian flattened the Bahamas. A major glacier in the Alps began to collapse. The Patriots went 6-0.

An unexpected bright spot, though: housing. August starts surged to 1,364,000, up 14.5% from July and 6.6% YoY. Again multifamily took center stage with a 43% monthly increase, but single-family didn’t miss the party entirely. A 4.4% monthly gain and +2.2% YoY are nothing to be sneezed at.

By today’s standards, anyway. The bar is about as low as it can get. It’s been 2007 since we finished a year with more than 1.3 million starts.

Yeah, this is a cyclical business. But while construction activity fluctuates, demand doesn’t. The population growth rate is all but rock solid. No matter how robust the boom or how severe the bust, homebuilding should always return to the mean. 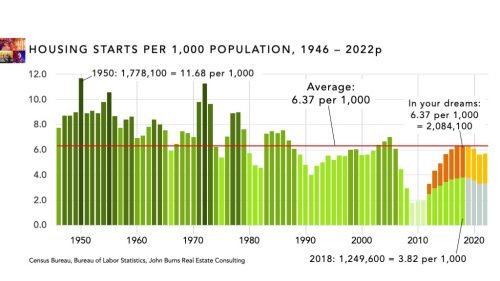 Whatever the reason, nearly everyone believes boom-bust cycles are the norm and this sluggish market is an aberration. But what if we’re wrong?

There’s no law that says the ratio of housing starts to population has to be 6.37 per 1,000. That ratio may have been skewed during the 40-odd years following World War II between pent-up demand following the Great Depression and the war, unprecedented government support for home ownership, and Baby Boomers—then the largest generation in U.S. history—entering their prime home-buying years.

Pundits love to talk about “new normals.” Usually it’s a ploy to grab attention or rattle cages, but that doesn’t mean they’re always wrong. It is not impossible that the post-World War II era was the aberration and we are just now settling back into a normal housing market.

If so, that could change your strategy dramatically.

Take, for example, the stick framing vs. components debate. For nearly a century, experts have insisted that homes should be built in factories like automobiles. They blame fragmentation for the industry’s storied resistance to change, and they’re not wrong.

But fragmentation has value; it cushions industry players against boom-bust cycles. With minimal capital investment, small builders and trades can shut down when work dries up, then jump back in when the recovery comes. Larger builders rely on subcontractors specifically to avoid fixed assets that would make it difficult to scale down quickly when the market crashes. 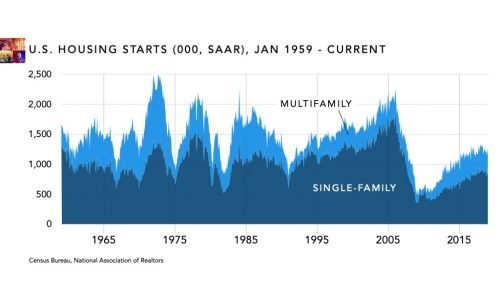 Housing starts fell 73% from their 2005 peak to the trough in 2009. Roughly one third of building contractors went out of business, but that was due to the duration of the recession, not the severity. By comparison, auto and light truck sales fell 39% from peak to trough and the Big Three automakers would all be gone today if not for a massive government bailout.

Asset-heavy suppliers get through severe downturns by diversifying beyond new residential construction, but the more assets you have, the harder it is to stay afloat. That’s why many dealers are wary of panel plants.

If we’re seeing a return to the comparatively mild cyclical swings of the 1950s and 60s, though, capital investment becomes less risky. That might encourage more prefabrication—and probably would encourage more innovation.

Another question is how equity investors would react. They’ve flooded the LBM channel with money in the belief that Millennials—who displaced Baby Boomers as the largest generational cohort in U.S. history—would drive a massive housing boom when the economy improved. Some are in the business for the long haul, but many planned to ride the wave to its crest, then cash out.

So far that wave has been AWOL because household growth never returned to its long-term average. In 2000, roughly 20% of 25- to 34-year-olds (GenXers) lived with parents, relatives, or roommates. By 2016 that number had ballooned to 34%. Without new households there is no need for new housing units, for sale or rent.

Nearly everyone believes Millennials will strike out on their own sooner or later, but no one knows when. If equity investors give up on the notion of an imminent housing boom and take their money elsewhere, that changes the picture for aging independents. Right now, anyone with a reasonably clean balance sheet (and many without) can find a buyer almost on a moment’s notice. Family succession or an ESOP require more planning.

It’s possible that this is just the lull before the next storm. Just this week, Forbes was crowing that “The Biggest Housing Boom in History Has Just Begun.” Its argument is that “every year for the next decade, tens of millions of Millennials will hit home-buying age” (never mind that there are only 75 million Millennials total, spread evenly over a 15-year span).

One way or another, the massive swings in construction activity that have defined the industry since the 1970s are not guaranteed to continue forever. By all accounts the economy as a whole is entering a period of steady but slow growth.

The same may or may not be true for housing. But considering the past 20 years, a little boredom wouldn’t necessarily be a bad thing.