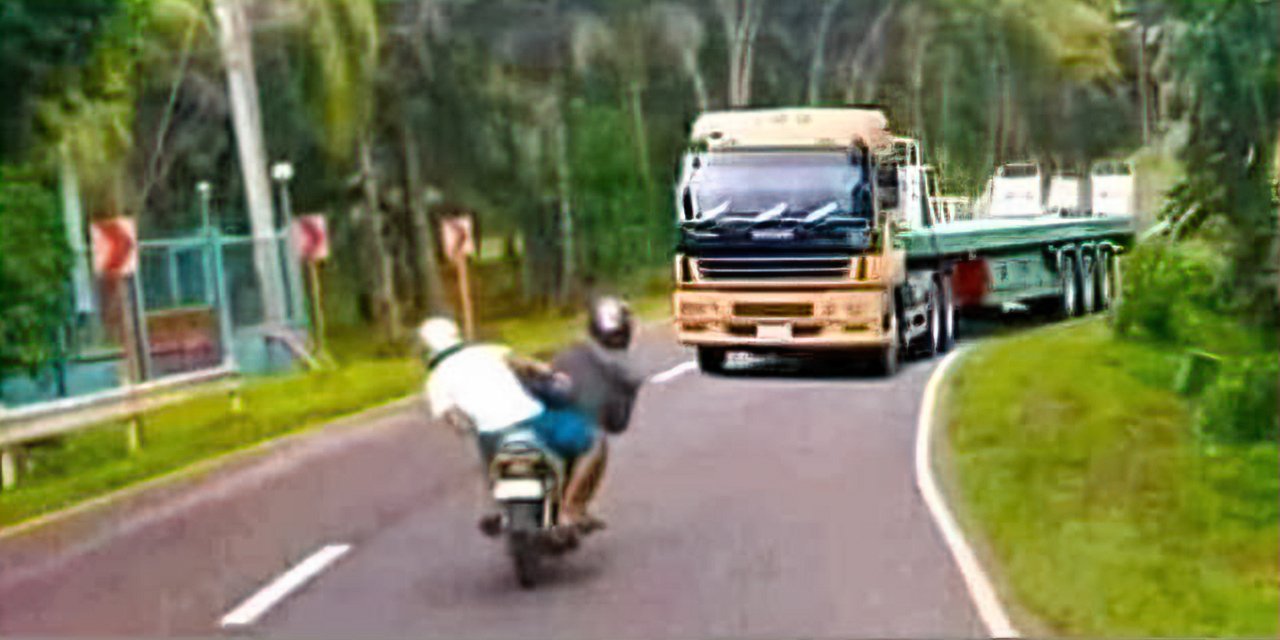 It’s been three weeks since California became the first state to issue a stay-at-home order. Yes, it does feel like three months.

Nearly 17 million initial unemployment claims have been filed during those three weeks. The unemployment rate has jumped from 3.5% to nearly 15%, “the highest level since 1940,” as Fortune helpfully points out. JPMorgan economists say we’ll reach 20% by the end of April. In 1933, the roughest year of the Great Depression, unemployment peaked at 24.9%.

Surviving the virus is everyone’s top priority right now. After that comes economic survival. That won’t be a walk in the park, either.

Federal social distancing guidelines are officially in effect through April 30. It’s no secret that the Trump administration wants to restart the economy sooner rather than later; the president had to be talked out of lifting restrictions for Easter.

Initial estimates were that the virus could kill as many as 2,000,000 Americans. Once stay-at-home and social distancing orders were in place, the expected death toll fell to 200,000. Now, says Dr. Anthony Fauci of the White House coronavirus task force, it “looks more like 60,000.”

Killing the economy will save lives. But 20% unemployment will cause widespread suffering at the very least, and almost certainly cost lives, too. This is not as simple as some make it out to be. Here’s where we stand: 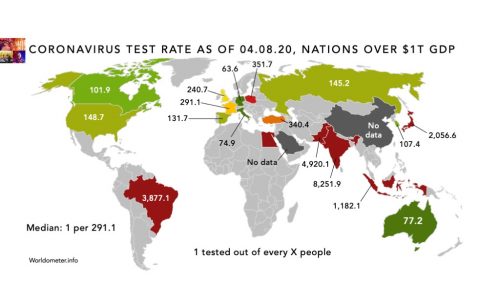 The obvious catch is that only a tiny fraction of the population has been tested. We still have absolutely no idea how many people have been infected.

Hopefully we’re getting graded on the curve. The caveat is that the numbers vary wildly from one state to another. More than one out of every 83 New York residents has been tested. In California it’s barely one out of 1,000 (see covidtracking.com to get the latest data for your state).

Stay-at-home orders are in effect in 43 states plus D.C. They didn’t all start at the same time and they won’t end at the same time. But if they did all reopen May 1st, the lockdown periods would range from 42 days in California to 24 in Missouri. 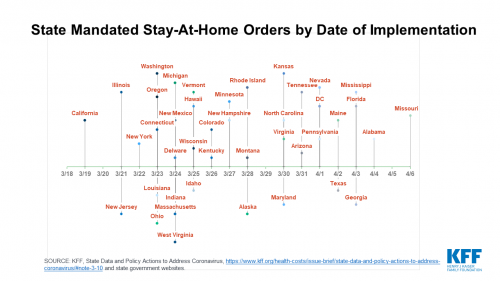 The new infection rate is projected to peak over the next week in both the U.S. and Europe, then start to decline. The question is whether a “very acute second wave” of infections will kick in if the lockdowns end too soon.

The only thing we know right now is that the lockdowns will end—someday. Not because of a vaccine; that won’t help anyone who’s already sick. While most health experts say a vaccine is a year or more away, scientists at Oxford University just this weekend announced that they may have something ready by September. “If everything goes perfectly” in clinical trials.

What we really need is a cure. “The availability of an effective treatment—which would reduce not only symptoms but also the chance of complications—would certainly help in terms of getting back to normal,” says Pinar Keskincak, director of the Center for Health and Humanitarian Systems at Georgia Tech.

We don’t have one yet, but an anti-viral drug developed by a California company to treat ebola may work. It’s in the early testing phase. A second anti-viral drug, used to treat seasonal flu in Japan since 2014, is in clinical trials in Massachusetts and in China. If it works, Japan could ramp up production quickly. 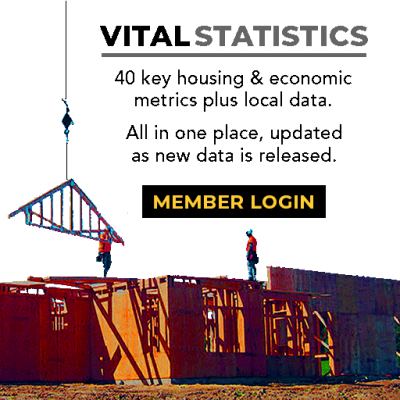 The other possibility is that the virus will simply reach its sell-by date. Coronavirus has been slow to mutate, at least so far. If that holds, we’ll reach a point where so many people have developed immunity—they either got sick and recovered or were naturally resistant—that it won’t matter if we’re exposed.

Dr. Fauci says that if things play out that way, he expects life to be back to (sort of) normal in time for the election. Given that it would presumably take months to ramp up production and distribution of the Japanese drug, it looks like you’ll have plenty of time to get your video conferencing chops up to snuff.

One way or another, we’ll get there eventually. So what happens then?

President Trump insists that “the U.S. economy will leap back to life ‘like a rocket’ after the coronavirus crisis is over.” New York University economist Noriel Roubini—whose nickname is Dr. Doom—thinks we’re in for a Greater Depression.

If you did the math, you noticed right away that both forecasts leave us in a hole. If it turns out that we follow JPMorgan’s script, GDP at the beginning of 2021 will be 17% below its level at the end of Q1 2020. 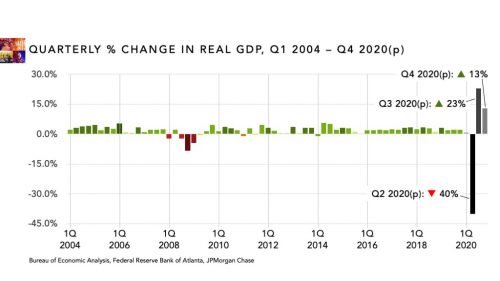 No question this is going to hurt. Stimulus has been critical, but “the longer we sustain the lockdown, the deeper the scarring to the economy,” notes Columbia University professor Adam Tooze.

On the bright side, analyst Cullen Roche points out that there is a solid structural reason why we’re better equipped to come back quickly now than we were in the Great Depression. In 1929, manufacturing and agriculture made up 40% of GDP. Today, none of the 17 major sectors of the economy accounts for more than 10% of the total.

There won’t be any lack of desire to get back to work. Instead, the issue will be little glitches that prevent big things from happening.

For example, the parts that go into a new F-150 come from suppliers in more than a dozen countries. All of them need to be back on the job if Ford wants to have trucks to sell.

Likewise, most framers could be ready to start framing tomorrow. But if we can’t get door hinges because the supply chain to China is down, housing will be dead in the water (literally as well as figuratively) until it comes back online. 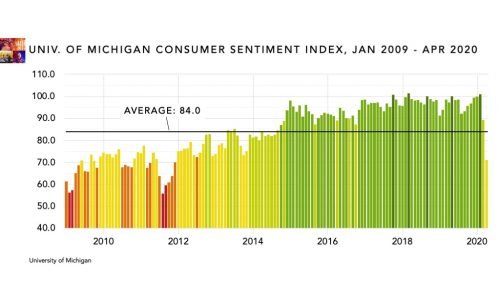 Equally important, an economy that is 70% dependent on consumption relies on consumer confidence. More than half of Americans say they took a moderate or a significant financial hit in March. With or without stimulus, they aren’t going to do any better this month—or, for that matter, next month or the month after that.

Unfortunately, more than a few businesses will succumb to the coronavirus crash, too, but once it’s safe to go back to work, distribution channels repair themselves fairly quickly. The optimism to go out on a limb for a mortgage or a new F-150 is more delicate.

The University of Michigan Consumer Sentiment Index fell from 101.0 in February to 71.0 in April. That’s the lowest level since Dec 2011 (69.9). From that point it was four years until consumer confidence was reasonably solid. It took another four for the housing market to return to normal. We’re back to square one now.

After two global catastrophes barely a decade apart, the most important question isn’t how quickly we can get back to work. The big question is what we need to do differently to make sure we don’t get blindsided a third time.

1 thought on “An indelicate balance”