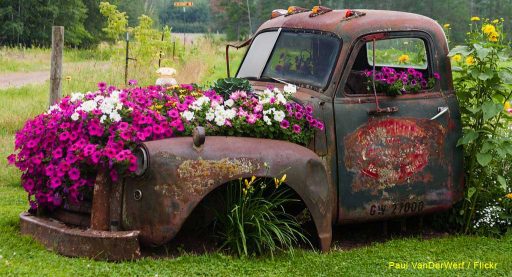 I just realized I’ve been looking at this wrong the entire time. Word on the street is that another major acquisition announcement is imminent, and I’m disappointed.

Not in the companies that are about to close a deal, of course. That’s just business. But I’m always sorry to see a successful entrepreneur leave the playing field, just like I was sorry to see Drew Brees retire. I’m not even a Saints fan, but it was fun to watch him play.

A lot of independent LBM dealers feel the same, and we’re all wrong. Consolidation shouldn’t be disappointing. Just the opposite, actually. We are living in a unique—and probably fleeting—era in which well-run independents have a ready-made exit strategy.

This stuff never lasts forever. Eventually we’ll reach a point in the business cycle when investors decide that the opportunity has passed. Or we’ll run out of willing sellers large enough to be viable acquisition targets.

Or maybe we’ll run out of buyers. The mergers of Builders FirstSource, ProBuild, BMC Holdings, and Stock Building Supply took four of the five largest off the table. Even now, there are only a handful of top 100 housing markets remaining in which BFSPBBMCSBS doesn’t already have a presence.

At least not so far. In the meantime, if you’re a leading independent in one of those uncovered markets, you’ve got a new best friend. 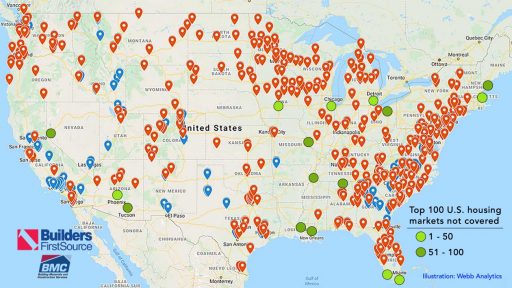 Two, actually. US LBM was purchased by Bain Capital last fall. According to SEC filings, BFSPBBMCSBS’s 2020 revenue was just shy of $12.8 billion if you include December’s acquisition of T.W. Perry.

HBS Dealer’s 2020 rankings aren’t out yet, but after a flurry of acquisitions at the end of the year, chances are US LBM slipped past 84 Lumber to take the No. 2 slot in LBM. If so, the company is still a distant second. US LBM may have cracked $4 billion last year, but BFSPBBMCSBS is three times larger.

That suggests two distinctly different strategies that will drive consolidation in the industry for a while. Both create opportunities for independents, but both require a little bit of context.

THE OTHER BOOM MARKET

The starting point is a worldwide boom in the private equity industry. We think housing is on the verge of an exceptionally long, strong boom cycle. PE has been living the dream for a decade.

Why is no mystery. Interest rates have been at historic lows ever since the Great Recession. Institutional investors were forced to look elsewhere for the returns they want, and private equity has become the investment world’s soup du jour.

“The past five years have been ones of unprecedented success for the private equity industry,” notes Bain in its 2019 Global Private Equity Report. “During that span, more money has been raised, invested, and distributed back to investors than in any other period in the industry’s history.”

In 2010, PE firms raised a piddling $326 billion worldwide. By 2019 that number had risen to nearly $1.09 trillion—yes, with a “t.” The industry hit a pothole like everyone else when the pandemic struck, but still raised $989 billion last year.

That’s a temporary glitch. If U.S. GDP gets anywhere near the 6%+ growth rate projected for 2021, everyone expects private equity fundraising to skyrocket. 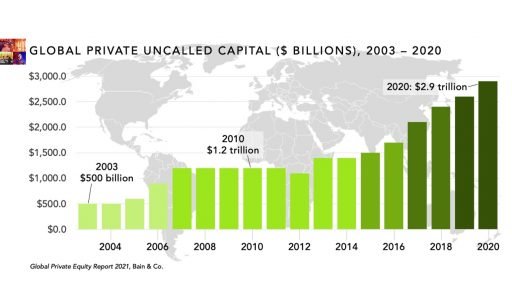 Private equity is known for targeting slow-moving companies in rapidly-changing industries such as manufacturing, healthcare, and technology. While the business model has mellowed considerably since the days of so-called vulture capitalism, the formula is still not calculated to win friends and influence people.

As Bloomberg Businessweek explains, three things differentiate PE from other types of investments. “First is the leverage. Acquisitions are typically financed with a lot of debt that ends up being owed by the acquired company.”

Second, PE firms like to help. In fact, they insist on it. “Over the years, firms say they’ve shifted from brute-force cost-cutting and layoffs to McKinsey-style operational consulting and reorganization. Still, the business model has put PE at the forefront of the financialization of the economy—any business it touches is under pressure to realize value for far-flung investors. Quickly.”

Third, says Bloomberg Businessweek, “the fees are huge. Conventional money managers are lucky if they can get investors to pay them 1% of their assets per year. The traditional PE structure is ‘2 and 20’—a 2% annual fee plus 20% of profits above a certain level.”

That’s a great gig if you can get it. Trouble is, the landscape is changing. After a decade-long flood of capital, the low-hanging fruit in PE’s favored target sectors has apparently been eaten. Investors have been forced to venture into industries that are traditionally ill-suited to flipping in 4.5 years, such as construction supply.

Plus, PE firms aren’t the only ones with wheelbarrows full of other people’s money. “GPs (general partners) are clearly hungry to do more deals,” says Bain. “But when they find attractive assets, they consistently encounter aggressive corporate buyers willing to push up auction prices. Those buyers are strategic, meaning they will pay more to advance corporate objectives and capture synergies.”

And unlike housing, the law of supply and demand works fine in M&A. In its 2021 report, Bain says that “amid heavy competition and a flood of investment capital, buyout multiples continue to defy gravity in 2020, averaging 11.4 times earnings before interest, taxes, depreciation, and amortization (EBITDA) in the U.S. as of year-end.”

If you’ve ever wondered how PE got interested in a slow-moving, low-margin business like LBM distribution in the first place, that may be your answer: We’re the Dollar General of investment opportunities. 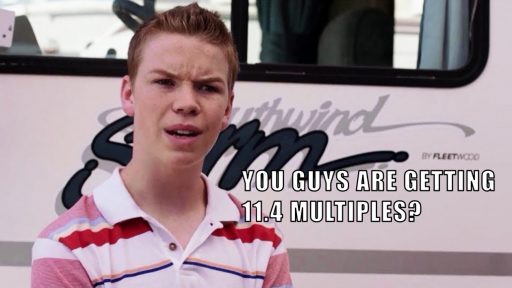 Bain’s plan to overcome those challenges is no secret. Selling that plan to potential investors is the purpose of its annual reports. It may not be the exact playbook US LBM is following, but if not, it’s close enough that you’d mistake the two for cousins on the street.

The strategy is called buy-and-build. It isn’t new; at heart it’s a measured shopping spree that can go on almost indefinitely (by which we mean 4.5 years). Says Bain, “We define buy-and-build as an explicit strategy for building value by using a well-positioned platform company to make at least four sequential add-on acquisitions of smaller companies.”

Buy-and-build takes advantage of the fact that markets tend to value big companies higher than small ones. Once you’ve got the platform in place, you start picking up add-on acquisitions at lesser multiples. The more you buy, the lower your average acquisition cost will be.

As Bain explains, “Serial acquisitions allow GPs to build value through synergies that reduce costs or add to the top line. The objective is to assemble a powerful new business such that the whole is worth more than the parts.”

That’s a great idea. But Bain warns that implementing a buy-and-build strategy is not as easy as it looks.

“Having coinvested in or advised on hundreds of buy-and-build deals over the past 20 years, we’ve learned that sponsors tend to underestimate what it takes to win. Every deal is different, of course, (but) the most effective buy-and-build strategies share several important characteristics.”

One is what Bain calls room to run. “Value creation depends on a steady cadence of acquisitions, which means a sector has to provide an ample supply of targets and a stable environment in which to pursue them.”

Yup, that’s us. According to Freddie Mac, “the U.S. housing market is 3.8 million single-family homes short of what is needed to meet the country’s demand.” By all accounts, we’re going to fall further behind before we start catching up. That’s as stable as it gets in this business.

Nor is there any question that LBM has plenty of targets. There are roughly 5,300 lumberyard firms in the U.S. and at least 150 of them are big enough to be worth US LBM’s attention.

A second characteristic is plenty of white space: “How many businesses are there in the sector that might naturally transact? Are a lot of founders reaching retirement age, or are macro pressures making it difficult to remain independent?” On the flip side, “How many other consolidators or strategic buyers are already at work in the industry?”

There are no hard numbers. Anecdotally, everyone in the channel thinks we’ve got so many old guys ready to hang it up that Naples and Bonita Springs are installing coin-operated benches in the common areas at all the malls.

Macro pressures are more perceived than real, at least so far. Independents worry that chains will cut them out of the loop with megabuilders or manufacturers, but that hasn’t happened. No one likes to be dependent on oversized channel partners—suppliers or customers—so it may never happen.

Whether the channel is overrun with consolidators is also anyone’s guess. US LBM, BFSPBBMCSBS, and Kodiak are the only active consolidators with over $1 billion in annual revenue. On the other hand, smaller buyers have been coming out of the woodwork lately.

A third characteristic—and maybe the most important of the bunch—is a solid platform. “The most effective buy-and-build strategies assume that the platform company’s free cash flow will fuel acquisitions,” explains Bain. “The PE fund is theoretically a backstop if the platform asset starts to sputter, but few GPs are willing to throw good money after bad if the well runs dry.” 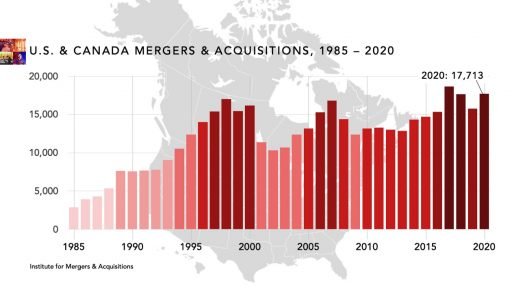 We can only assume that US LBM fits the bill. Its only published financials are for 2018, when the company was planning to go public. US LBM’s net margin that year was a measly 1.1%, but prepping for an IPO costs money. Its adjusted EBITDA in 2018 was 7.1%, so apparently that’s where the money went.

In the end, it doesn’t matter whether the LBM channel is ripe for consolidation or not. Bain clearly believes it is and has a pile of money to test that theory.

BFSPBBMCSBS has a few holes in its geographical coverage to fill, but US LBM may be on a shopping spree for as long as Bain owns the company. The question is how much that matters.

Every consolidator talks about creating a business “such that the whole is worth more than the parts.” They’re not talking to you; they’re talking to the next owner. At some point—possibly 4.5 years—Bain will be ready to monetize all that value it created for its investors.

Maybe US LBM will go public, maybe Bain will sell it to another PE group. If it’s the former, US LBM will become an institution like BFSPBBMCSBS. As long as it can provide reasonable, steady returns, its prime directive will be to avoid rocking the boat and upsetting investors who know absolutely nothing about the company.

If it’s the latter, the new owners will almost by definition be convinced that they can squeeze even more value out of the asset than Bain. That might not be comfortable if you’re the asset—or it might be an opportunity to chase ideas that no bank would touch.

Under Fidelity, ProBuild tried a number of initiatives that could have shaken up the channel in a big way if they had succeeded. The fact that they didn’t succeed proves nothing more than what Albert Einstein said—i.e., the best way to have a good idea is to have a lot of ideas. As always, the trick is funding them.

Private equity may have a less-than-spotless reputation with the general public, but the PE industry is booming for a reason: Compared with bank financing, equity is a far more flexible way to fund a business. It’s easier to survive down cycles, easier to get funding for innovation, and easier to cash out when the time finally does come.

Besides, you’ll never convince a bank that two plus two can equal five.