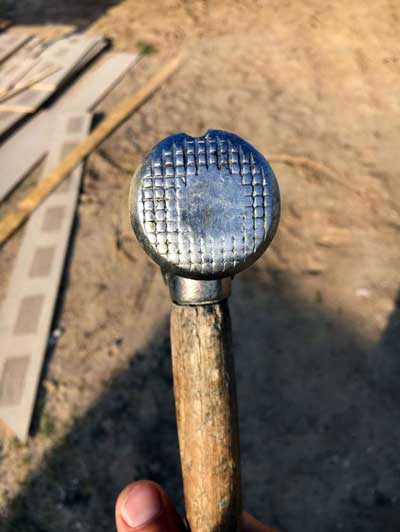 One hundred years ago, lumberyards sold wood and offered two services: delivery and credit. That was it. Except price. Don’t forget price.

In the early 1950s, Wickes flipped the table over by adding building materials and hardlines at rock-bottom prices made possible by eliminating delivery and credit. Both came back, but lumberyards were forced to become full-line LBM dealers. It was a pain in the ass. It complicated everyone’s life and cost a lot of money.

Then came service. Not as we define it today, but by the 60s you had to be sociable and sometimes accommodating. No more fistfights with builders who tore up your units trying to cherry-pick all the Select Structural out of your No. 2 & Better. That was a pain in the ass, too.

The notion that service could be more valuable than quality or price took hold in the 1980s. As big boxes hoovered up everyone’s consumer trade, the challenge was to go contractor-only without getting the profit beat out of you.

Quick delivery, jobsite staging, and project co-management all helped neutralize price. Manufacturing was the game-changer. Builders got faster build times and more consistent quality, but prefab also muddied the waters and made it harder for them to buy on price alone.

We’re due for another turning point and it looks like we’re about to get one. The industry is in an untenable position: We’ve reached capacity at 1.3 million housing starts per year when we need 1.5 to 1.6 million to keep up with population growth.

Everyone knows trade labor is the obstacle and there is no solution in sight. But everyone defines the issue as a shortage of skilled workers, especially in framing. Actually there is no shortage.

Yes, there are fewer framers working today than during the housing bubble before the Great Recession. But there are also fewer starts. The number of framers per square foot built is only slightly below its 30-year average—and well above its ratio during most of the 1990s.

We’ve got enough bodies. If we’re stuck at 1.3 million starts, it’s because the bodies we have aren’t getting enough done.

The McKinsey Global Institute has the numbers to back it up. Productivity in the construction sector overall is no higher today than it was 80 years ago. The dollar output per worker in the specialty trades has actually fallen.

And no trade has lost ground faster than framing. According to McKinsey, framing subs’ output per worker declined at a rate of over 3.0% per year between 2002 and 2012.

To be fair, productivity has been stagnant everywhere on the planet over the past 15 years. Productivity growth naturally plateaus from time to time. But when output declines—and especially when it falls despite huge advances in tools, materials, and equipment—it’s hard to see that as anything but mismanagement.

Obviously some builders are excellent construction managers. Apparently many aren’t.

We could argue all day about why. Maybe the rise of “developer” builders without construction background has led to inadequate planning or supervision. Maybe it’s a recruiting issue—i.e., builders have been so successful at squeezing cost out of their subs that they’ve turned framing into one of those “jobs Americans won’t do anymore,” as CNBC described it.

Whatever the reason, nearly everyone agrees on the solution: Build homes in factories to reduce the need for skilled labor on site. 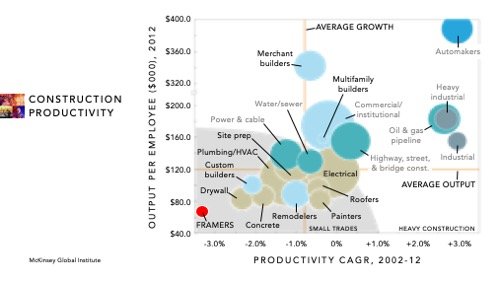 Not that they want to do it themselves. Instead, they want you to invest anywhere from $3 million to upwards of $8 million in automated manufacturing facilities with state-of-the-art design and engineering tech, then carry the ongoing expense of the expertise to run those plants.

And they want you to do it knowing that builders have a long history of embracing components whenever they can’t find labor, then dropping prefab like a hot rock as soon as the situation eases and framers become plentiful.

That’s why you need to provide labor as well as material.

So far at least, offsite construction does not save actual money. On the contrary, builders pay a premium for the package—typically around 10%—then get the dried-in shell up 60% to 70% faster. In the European approach to offsite, suppliers do the pre-construction planning that the builder should have done himself but often doesn’t. According to Entekra, the potential time saved from start to completion can be as much as 33%. That’s significant, but whether it saves real money still depends on how the builder values cycle time.

Panelization has always been a hard sell as a result, but when you provide turnkey labor and material, those issues all disappear. The builder no longer decides whether the structure will be stick-framed or panelized. He simply contracts to receive a dried-in shell built to X specs and completed on X date at X price. How you get there is none of his business.

Chances are that construction technology will eventually advance to a point where prefab is actually cheaper than stick-built. Fabricators have been trying for over a century and they haven’t succeeded yet, but there is a strong argument to be made that communication is the missing link. The internet solves that problem.

Maybe it’ll take five years, maybe it’ll take 25. But it doesn’t matter if you provide turnkey labor and material. Whichever way the market turns, it goes through you.