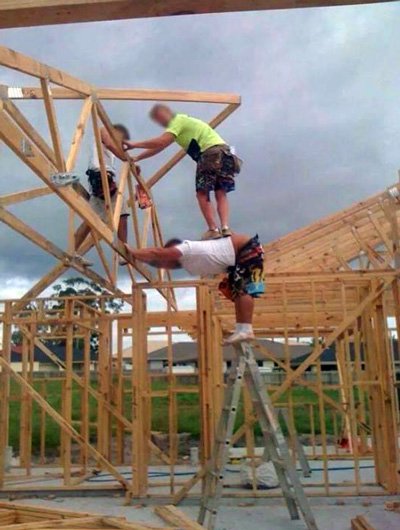 The problem with turning points is that it’s never clear what you’re turning toward until you’re already on the new path.

Analysts and academics chalk it up to the housing industry’s storied resistance to change. No one ever asks whether there are any valid reasons for that resistance.

Offsite has its advantages, but also disadvantages. On the plus side, panelization is faster. Total start-to-completion time on the average single-family home was about 204 days at last count. If you stick frame, it’ll typically take 10 to 15 days to put up the dried-in shell. With panels you can get the job done reliably in four days.

Panels reduce shell construction waste from 5% to about 3%. Since the structure is engineered rather than sized with span tables, they also consume 25% less wood.

On the flip side, panelization doesn’t reduce direct construction costs. The initial unit cost of panels is typically about 10% higher than stick framing. Presumably the time you save will cover that cost, but it’s not an easy sale. Most builders still think a bird in the hand is worth two in the bush.

More important, all prefab systems—panelized or modular—are inherently riskier than framing on site. If the specs are less than perfect or someone along the line fails to follow them to the letter, the need for field modifications can make a project more costly and time-consuming than if it had been stick-framed.

Yes, the real solution is Don’t screw it up. It doesn’t always work like that, at least on this planet.

This is not at all to say components are a bad idea or even that a component plant is a bad bet. Roof trusses are a no-brainer; two out of three builders use them and the numbers are climbing steadily. Wall panels (and floor panels) make perfect sense if you build a lot of repeatable assemblies (e.g., starter homes, multifamily, etc.).

But the industry still has a productivity problem and components don’t solve it. Even McKinsey says half the tasks that go into a construction project require can’t be automated because they require judgment.

We need skilled framers, and reducing their role on the jobsite won’t make them more productive. It’ll only make them more scarce, just like growth in the use of trusses has left us with fewer roof cutters.

There’s no getting around the fact that construction management practices need to tighten up. Someone has to take charge of finalizing the plan to make it buildable—not just the structure but systems that affect its integrity, such as the foundation and mechanicals—then see to it that the plan is executed faithfully.

This is why European offsite construction has people excited. American component manufacturers are every bit as good at building panels. Automation and BIM don’t make the final product any cheaper or more serviceable. 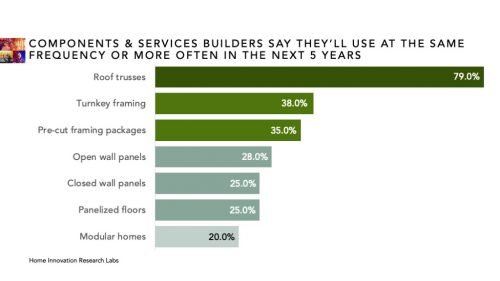 The difference is that the Europeans 1) take a “holistic” approach to design and engineering as Entekra’s Gerry McCaughey describes it, and 2) install everything they build.

That makes framing plug-and-play: Just sign on the dotted line and X days later you’ll have a dried-in shell ready and waiting.

Obviously not all builders will be willing to hand off responsibility for managing labor. Those who came up through the trades typically view their experience as a competitive advantage. They’ll continue to manage their own jobs whether they’re good at it or not.

Builders without construction background don’t see it that way. All they want is a dried-in shell delivered on time at the lowest possible cost. As long as the product meets their specs, they could care less who manages the work.

That group is growing, and as long as careers in the trades remain unpopular, the number of builders with hands-on construction experience will continue to decline. Throw in the fact that most other assemblies that go into a home are already sold installed and turnkey framing hardly looks like a radical idea.

As far as that goes, it’s not even new. In a some markets, framing subcontractors have been building their own components and supplying their own materials for years. Chances are more of them would do it if they had the resources, but most don’t. Suppliers do.

This not to say getting into turnkey won’t be a pain in the ass. Just like a $3 million truss plant, turnkey will complicate your life. There’s a learning curve, and chances are you’ll pay some tuition along the way.
But you don’t do it for your builders’ sake. You do it for the same reason you’d build a truss plant: to capitalize on an opportunity.

You can make money with turnkey. The projects are sold on a guaranteed bid, and that gives both the supplier and the sub a vested interest in making sure they run smoothly. If productivity really has fallen as far as McKinsey’s numbers suggest, the impact of careful planning and close supervision will be significant and immediate.

Plus, turnkey helps both suppliers and subs weather swings in market conditions. Right now framers are in the driver’s seat. Suppliers benefit from the partnership because the ability to supply your own labor helps close sales.

That won’t be the case forever. Eventually the immigration standoff will end or blue-collar careers will come back into vogue, or maybe offsite construction will grow enough to reduce demand for framers as the technology improves and the cost gap closes.

When labor supply and demand come back into balance, framers will benefit from supplier partners with greater resources to find new work, manage collections and other admin tasks, and invest in new technology to boost productivity.

Obviously not every market will be receptive to turnkey. Production builders seem to be more inclined toward it, although dealers in some markets are framing for custom home builders. The best indicator appears to be whether your client base is mostly developer builders or builders who came up through the trades.

While turnkey isn’t commonplace, it is widespread. In 2018 27 of the ProSales 100 provided framing services. A recent Executive Council on Construction Supply survey found that someone—either a dealer or a framer—provides turnkey framing in at least 45 of the top 50 U.S. housing markets.

Most of the action has been in major metros, but that doesn’t mean rural areas are off the hook. The offsite movement also includes modular builders such as Unity Homes in New Hampshire. If (or maybe when) high-tech modular builders get traction, they’ll inspire copycats who will make life difficult for rural stick builders.

If components eventually come to dominate the wood-frame market, European offsite will be the reason. The European model has its weaknesses and no doubt American component manufacturers will figure out how to exploit them. But the value proposition is compelling, mostly because of turnkey.

Right now the challenge is to convince builders that the time they save has value that outweighs the additional cost of panels. In fact the vast majority of that value comes from selling the homes they built faster, and that’s a crap shoot.

If you provide turnkey, the argument is that it’s better to buy a plug-and-play shell at a predictable price than it is to roll the dice on low bidders who care only about materials or labor, and who might well be inclined to cut corners everywhere they can to claw those dollars back.

It may be that stick framing won’t lose any market share at all if the productivity problem is addressed. There is evidence that journeyman framers performing at the top of their game can match the speed and efficiency of panelized construction, and stick framing still provides a degree of flexibility components can’t match.

Whichever way the market turns, turnkey gives you leverage. If developer builders don’t care who does the work, they also won’t care whether the structure was stick framed, precut, or panelized.

However this plays out, we’re going to need skilled framers. If you’re looking to invest, stake your claim in construction productivity. The carpentry trade is about as undervalued as any investment you could make.