A week ago Monday, the umpire finally called the pitch. The National Bureau of Economic Research declared that “the U.S. is officially experiencing an economic recession.” If your first impression was No s**t, Sherlock, you weren’t alone.

Last week, Federal Reserve chair Jerome Powell noted that “we went from the lowest level of unemployment in 50 years to the highest level in close to 90 years, and we did it in two months. This is the biggest economic shock in the U.S. and in the world, really, in living memory.”

NBER doesn’t do shock or awe. Its job is to conduct research, and one of its tasks is to define the precise start and end points of each recession so everyone has a solid baseline for analysis. To qualify as a recession, the decline in economic activity has to last “more than a few months,” says NBER. This one started in February. It also has to be “spread across the economy” and include “real GDP, real income, employment, industrial production, and wholesale-retail sales.”

The twist is that five days before NBER made its announcement, Moody’s Analytics chief economist Mark Zandi declared that “the COVID-19 recession is over.” This is one reason economics is known as the dismal science.

Layoffs peaked in late March and early April, but began to decline in May and have been falling ever since. “I would expect job growth to resume in June,” says Zandi.

That’s good news, of course. But even if job growth plays out as Zandi expects, we apparently have some distance to go before we’re out of the woods. In the Great Recession, the worst calendar year was 2009 when real GDP fell 2.5%. But the total contraction over an 18-month period from Q4 2007 to Q2 2009 was 4.0%.

That was the wheels coming off the economy. This time we hit a tree. 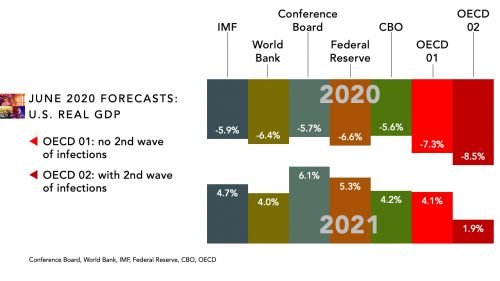 Between government agencies and economic development organizations (i.e., not counting investment gurus with a vested interest and a buddy at Business Insider), the most optimistic forecast as of June comes from the Conference Board: a 5.7% contraction in 2020 followed by 6.1% growth in 2021.

In that scenario, we’d finish 2021 almost exactly where we stood at the beginning of 2019—except for about $4 trillion in debt on top of the $19 trillion we already owe. The Conference Board’s assessment of the recovery is an outlier, though. Pretty much everyone who doesn’t think the economy is a rocket ship believes it’ll take the better part of a decade to dig out of this hole completely.

The Congressional Budget Office is forecasting “only” a 5.6% contraction in 2020. But CBO has also “marked down its 2020-2030 forecast for U.S. economic output by a cumulative $15.7 trillion, or 5.3% relative to its January projections.”

At the sad sack end of the spectrum, the Organisation for Economic Co-operation and Development (OECD) thinks the U.S. economy will shrink 7.3% in 2020, then post 4.1% growth in 2021—unless we take an 8.5% haircut this year and then grow just 1.9% next year.

The difference is the pandemic: In OECD’s opinion, a second wave of infection later this year means a bigger hit to the global economy and a slower recovery. COVID-19 cases have been rising lately, but press reports may make the situation sound worse than it is. The other day, the Washington Post noted that “Alabama saw a 92% change in its seven-day average while Oregon’s seven-day average was up 83.8%.”

The raw number of cases is bound to fluctuate as the pandemic progresses. A more meaningful metric is the transmission rate (Rt)—i.e., the average number of people infected by each person who carries the virus. If Rt is 1.0, it means that on average, each infected person infects one other person and total cases remain stable. If Rt is 2.0, infections grow exponentially: One person infects two, those two infect four, those four infect eight, etc. In six months, a single infection would balloon to 262,144. 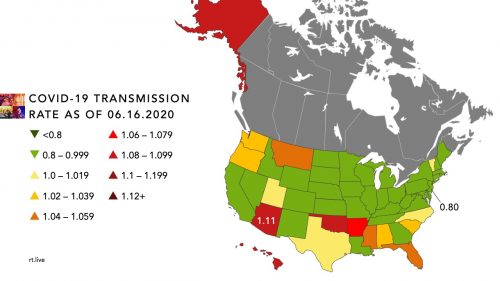 That may change now that the lockdowns are over. “People mistake the idea of society reopening with the idea that society is safer,” says one doctor. “Things are no safer today than they were weeks ago when we were in full lockdown.”

But even if we do get a second wave, that doesn’t guarantee we’ll see the full-blown panic that caused so much economic damage in April. If Americans are backing off on face masks and social distancing, it may be that they’re starting to realize that the coronavirus is not as dangerous as ebola or smallpox.

The global case fatality rate (odds of dying if you catch the virus) is estimated at 5.4%. Yeah, that’s 54 times higher than seasonal flu. But in absolute terms, it means the average person has a 94.6% chance of recovering from the virus.

The caveat is that the data is incomplete, so all these numbers are guesswork. But there is one thing we do know for sure: The pandemic will not end until we achieve herd immunity—i.e., at least 70% of the population is immune to the virus. There are two ways to get there.

The first is with a vaccine. A few experts think we’ll have one early next year. Most say it’ll be 12 to 18 months and even then it may only provide temporary immunity. Some point out that there’s no guarantee we’ll find an effective vaccine at all. 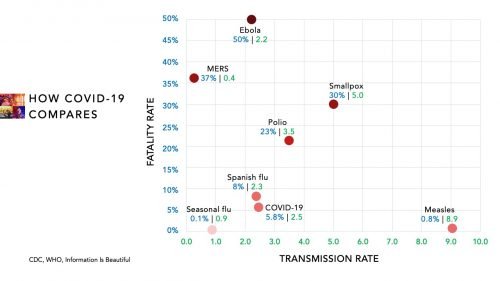 The other way to get herd immunity is to get on with our lives and let the pandemic run its course. Some think that’s horribly callous: If you don’t make it, well, sucks to be you. But the reality is that if you aren’t vulnerable to coronavirus, you won’t die from it. Even in the U.K., where the case fatality rate is nearly triple that of the U.S., COVID-19 kills just 1.1% of people under 60.

Obviously a few people are vulnerable and don’t know it. For most, the markers are clear—age, heart disease, respiratory disease, or a compromised immune system. If you tick any of those boxes, the solution is dirt simple: Wear a face mask.

A recent study commissioned by the World Health Organization found that wearing a mask, maintaining a three-foot distance (not six), and practicing good hygiene reduces the risk of infection by 85%. It’s a minor inconvenience, but it lowers the odds of dying from COVID-19 to roughly the same as dying in a car accident—which doesn’t scare anyone, including those folks who should be petrified every time they take the wheel.

No question that COVID-19 is nasty stuff and we should be taking precautions to protect everyone who is vulnerable to it. But it’s also a problem that many people are, well, let’s just say inclined toward hyperbole.

Here’s BuzzFeed: “After a terrifying spring spent in lockdown and a summer of protests, the U.S. economy right now is like a jumbo jet that’s in a steady glide after both its engines flamed out. In about six weeks, it will likely crash into the side of a mountain.”

Actually, that “terrifying” spring in lockdown was pretty peaceful overall. At least until everyone learned how to use Zoom.

Likewise, most Americans see the protests not as a breakdown but a necessary if uncomfortable reminder that we’ve got unfinished business. One way or another, the protests have been comparatively nonviolent. Old-timers who lived through the 1960s are grumbling that kids today don’t even know how to put on a decent riot.

As for the economy, the crash that meant something was last July’s crash through the all-time record for consecutive months of expansion. We deliberately pulled the plug when the pandemic hit. Up to that point, we were actually gaining momentum. So does it really make sense that all that economic horsepower just vanished into thin air?

Typically a good way to deal with competing projections is to throw out the outliers and take the average of the rest. In that scenario, chances are CBO is right: An 80% to 90% recovery will come quickly, then it’ll take years to get the remainder.

We all wish that wasn’t the case. Wishing does about as much good as panic.

2 thoughts on “A flashmob recession”