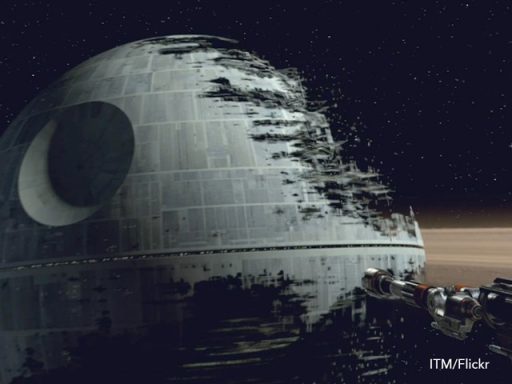 Construction professionals everywhere felt a great disturbance in the Force when Menlo Park, Calif.-based Katerra filed for bankruptcy in early June. You’d get noticed, too, if you took $2.4 billion of other people’s money to revolutionize an industry, then abandoned the jobsite before the drywall was delivered.

It’s common knowledge that Katerra struggled to get projects built on time and on budget. Everybody’s got a theory about why. Some say the company bit off more vertical integration than it could chew. The word hubris pops up a lot. If you’re interested in a detailed post mortem, former Katerra staffer Brian Potter has a good one at Construction Physics.

Whatever happened, one thing Katerra’s blowout did not do was shake the faith of true believers in offsite construction.

Fast Company asks, “If Katerra can’t make it, can any prefab company?” then answers with a resounding yes. FC worries only that “the collapse of Katerra might discredit other attempts to innovate.” At The Builder’s Daily, John McManus believes Katerra’s demise will only inspire builders to “blaze paths to progress.” MacManus is convinced that “bill of materials disciplines that epically fuse data to manageable digital thread production, design, and engineering are the way forward.”

Ever since Katerra and others caught the public’s eye in 2017, offsite construction has been one of the hottest topics in housing. You could hardly crack open a trade magazine without encountering the virtues of high-tech design, fully automated factories, and ultimately an end to dependence on a workforce more interested in protecting its livelihood than blazing paths to progress. 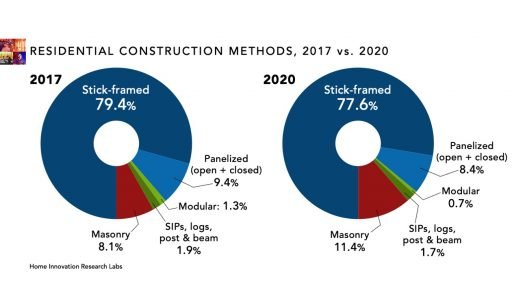 And yet according to surveys from Home Innovation Research Labs, offsite has actually lost market share since 2017. Between the ongoing labor crunch and all the media attention, you would think it would have gained ground.

The mystery gets even deeper when you separate single-family construction from MFLC. Panels often make sense in MFLC. Typically there are plenty of repeatable assemblies to minimize engineering and setup costs, and cycle time is critical since the buildings generate revenue once they’re completed.

In single-family construction, the use of panels fell for four years straight, then rose dramatically in 2020, from 4.8% to 8.1%. That’s odd, too, because the cost-benefit equation in single-family is shaky at best.

Wall panels typically add 8% to 10% to the cost of framing (material plus labor). Using NAHB’s 2020 Cost of Construction survey as a guide, a 10% increase in the cost of framing requires a 13% increase in overall production to recapture those lost profit dollars (i.e., you need to build and sell 113 homes in the time it would have taken to stick-frame 100). 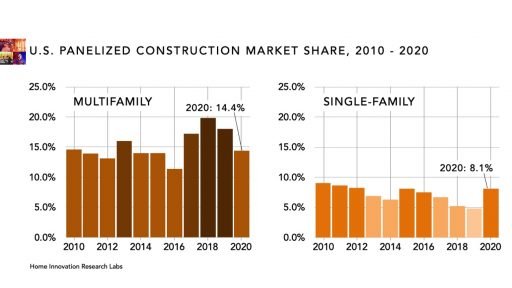 The catch is that framing only accounts for 12% to 15% of total build time when you stick frame. If wall panels reduce framing time by 60%, the net production increase is just 7% to 9%.

You can get a bigger boost with a fully-panelized structure (walls, floors, and roof) from a “data fused” provider (BIM integrated with automated panel lines) such as Entekra or Blueprint Robotics. Entekra says its system can reduce total cycle time—not just framing time—by as much as 33%.

The reason is that its engineers conduct a more comprehensive review of the plan than most component manufacturers. They not only address structural issues, but also design issues that affect mechanical and finish trades. That helps those trades get on and off the jobsite faster, which keeps the entire project on schedule.

But all that additional engineering costs money. It’s a safe bet that the premium builders pay needs to be higher than 10% in order for the supplier to make money. Nor is it clear that the builder will come out ahead. A builder who pays 20% more for framing needs a 31% increase in production to recover those lost dollars.

Modular and panelized construction have been around for decades and have never topped 10% total market share. If you’re wondering why, engineering may be your answer.

Take away the cost of engineering and factory-built homes are already cheaper than site-built. Within a decade or so, panels will be even more cost-effective because we’ll probably be delivering and installing them with robots. We already know how to build the machines; all we need is 5G cell coverage so they can be controlled remotely.

But you can’t panelize without engineering, and engineering requires judgment, expertise, and occasionally creativity. We’re not even sure we can automate those things, let alone know how.

McManus suggests that more automation plus “enormous” buying power enabled by scale and vertical integration would close the price gap between offsite and site-built construction. He cites Clayton Homes and Japan’s Sekisui House as examples of companies that have succeeded where Katerra failed.

Actually, both illustrate how difficult it is for even the largest offsite suppliers to cut production costs to a point where they offset the cost of engineering. Clayton Homes makes its numbers work by offering a limited range of designs with equally limited market appeal. Sekisui House operates in a country where factory-built homes have always been cheaper than traditional methods. Plus, it has plenty of cushion to work with. The median price-to-income ratio in Japan is nearly 12:1 vs. 4:1 in the U.S.

Even stick-framed projects would benefit from a detailed design and engineering review to fix all the errors and omissions in each plan before it gets built. Builders don’t do it because it’s cost-prohibitive. Instead, they’ve found that they can leave the plan…well, let’s just say less than perfect, then let the framers work out the bugs in the field.

Versus “trades are lazy,” that’s a more plausible explanation for why construction productivity lags behind other sectors. Other sectors don’t ask their assembly line workers to design the product as they build it.

McManus is not wrong when he says seamless data transfer from design through production is the way forward. But digital communication isn’t the only way to get there.

By all accounts, careful pre-construction planning plus close supervision on the jobsite have a huge impact on efficiency. Some builders already do it. If they don’t, turnkey framing or even better coordination between suppliers and subs will help. As digital communication evolves, coordination will become even easier.

No, that’s not as efficient as digital communication coupled with fully-automated production. But wood frame construction wasn’t designed to maximize efficiency. It was designed for flexibility to help the industry withstand severe boom-bust cycles.

It’s true that it may be a long time before we see another severe bust. Whether you believe the estimates or not, there’s no question that the supply of available homes in the U.S. has fallen well below what we need. If offsite is the future of framing, it should have plenty of time to prove itself.

But while blazing paths to progress always sounds exciting, our antiquated 200-year-old system has helped make homeownership in the U.S. more affordable than any other developed nation on the planet.

That’s not something to toss into the dumpster lightly.